Super-stylish with lots of quirky, lovely moments, the film loses its charm when it turns into a typical lovers-against-gangsters plot. 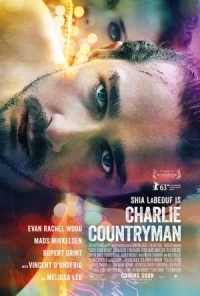 When a lovely young Romanian cello player chastises a shaggy-puppy American that he is only involving himself in her world because he “has a fantasy about helping a woman in a faraway land…”, she hits the nail on the head. Rather, I expect, she totally pegs the screenwriter of Charlie Countryman, one Matt Drake, whom I’m willing to bet is a young man with that exact fantasy. It’s too bad that this young-man’s fantasy inevitably involves bad men, so our hero can imagine himself as a knight in shining armor and rescue the girl. Really? Snooze.

We meet Charlie Countryman (Shia LaBeouf) in Chicago as his suffering mother is taken off of life support. His mom (Melissa Leo) appears to him in a vision to offer last words of comfort and to tell him, what the hell, he should go to Bucharest. In a lovely moment, Charlie, tears pouring down his cheeks, begs his mother to take away his last distressing images of her suffering, which overwhelm his memories. With a gentle smile, she gives him the idyllic image of the two of them playing by a lake when he was a little boy. Then his mother leaves him.

I just wanted to mention this great scene, because revisiting it almost makes my eyes well up. The film keeps this lovely, quirky tone as Charlie’s chatty seatmate on the long flight to Romania dies in his sleep. It’s hard for Charlie to explain to the authorities on the ground that the dead man asked Charlie to bring a gift to his daughter… after he was dead. This is how Charlie meets Gabi (Evan Rachel Wood), the lovely young cello player, who comes to the airport to pick up her (now dead) father.

Here is the point where I wished Charlie Countryman only lasted that first half hour.

Director Fredrik Bond and cinematographer Roman Vasyanov have created a lovely-looking, stylish film. Charlie’s puppy-love infatuation and his exuberance at being a stranger in a strange land is infectious. When not trying to cross paths with Gabi, he ends up at a dodgy hostel with scrappy international travelers, including the goofy Brits Karl and Luc ( Rupert Grint and James Buckley). Again, these subplots are fine. But with the introduction of Euro-trash gangsters, including Gabi’s hot psycho-killer husband Nigel (Mads Mikkelsen) and sleazy club-owner Darko (Til Schweiger), the film takes a big, ugly, annoying turn.

It is hard for me to completely dismiss Charlie Countryman, even though it ends up being a typical mis-matched lovers film surrounded by uber-violence. (Really, poor Charlie was a bloody mess by the finale, which is not really giving anything away since the “rescue fantasy” bulk of the film was so formulaic.) The thing is, there was a lot in there that I liked… I really liked. So much so, that while sitting through the closing credits, I was mentally editing the film, removing whole chunks, and expanding what I really enjoyed. Somewhere in there is a really good movie, but this cut wasn’t it.