What if the media created a war to improve the President’s ratings? Wait… What?!?!
By Lindaon July 25, 2014
0 Comments
Our Rating 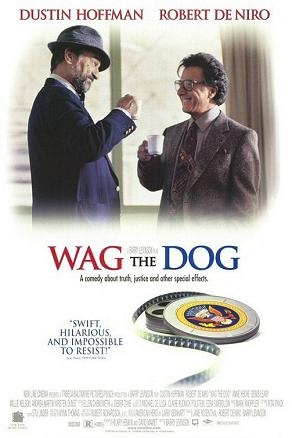 Wag the Dog is one of those films that will probably have cyclical relevance through the years, depending on who is in the Oval Office. There will be years that the premise will seem outlandish, and other times (like during Dubya’s reign) where it will seem like non-fiction, inducing queasy, uncomfortable laughter from the audience.

Released around the same time as Clinton’s Monica Lewinsky scandal, Wag the Dog almost seemed like a too-timely account of the then-current administration. Wag’s never-quite-seen President is faced with a scandal that is just about to be leaked to the press: A Girl-Scout-ish Firefly girl claims that something sexually inappropriate happened when she was left alone with the President on a field trip to the White House. The press has a hold of this sordid story, and the President’s spinmeisters have to think of something—FAST—to distract the public as the country is only a couple weeks away from the Presidential (re-)election.

Enter Conrad Brean (Robert DeNiro), a strangely confident media genius who is in the President’s pocket, but who doesn’t appear to have any sort of official role in the administration. It is his job to manipulate what is given or not given to the media. Let’s just say he is on the President’s speed-dial. In the face of crisis, he and the official press liaison Winifred Ames (Anne Heche) enlist the help of a wacky Hollywood producer (Dustin Hoffman) to concoct the ultimate breaking news: WAR! War with… Albania! Yeah! Why Albania, some might ask. Why not? Well… good point!

Seeing a Hollywood studio concoct scenes of war-ravaged villages, entirely through the use of stock footage and image manipulation is rather alarming. The war is entirely fictitious, but even has the international community up in arms. Americans are tying yellow ribbons to trees. The entertainment industry is coming up with rousing patriotic songs (Willie Nelson plays a hilarious role in this). And, unsurprisingly, patriotism runs wild. The “war” pulls people together in fear, and the President’s re-election ads encourage the public to “not switch horses in mid-stream” (which, even in the movie, is acknowledged as the dullest slogan ever). Stay the course! Sound familiar?

Wag the Dog is not a highbrow satire. It is actually played for broad laughs with its sharp script, and for the most part is quite a hoot. Dustin Hoffman has a field day as a washed-up Hollywood producer (fake tan and everything) who has never gotten the credit from Hollywood that he felt he deserved, and DeNiro is appropriately smarmy and a bit scary as the puppetmaster. This is the type of movie that probably seemed over-the-top at the time (eeek… a mere few years ago), but now, scarily enough, doesn’t feel that far from reality.