The Girl on the Train

Let me preface this review by saying I lurrrrrve Emily Blunt. And, to her credit, starring in this big-screen adaptation of Paula Hawkins’ bestselling novel of the same name is one of the main reasons I was super-excited to see it. Too bad the resulting film was slow, boring and, overall, kind of lame.
By Lindaon May 4, 2017
0 Comments
Our Rating 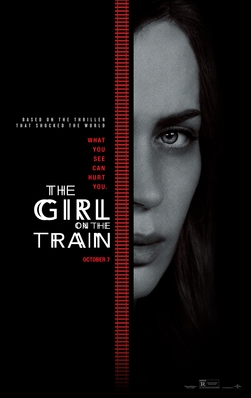 Blunt stars as Rachel Watson, a miserable, divorced alcoholic, whose once-idyllic life has devolved into one booze-fuelled blackout after another. She rides the train in and out of Manhattan every day and, during her commute, passes her former neighborhood, allowing her to spy longingly from afar on her ex-husband Tom (Justin Theroux), his new wife Anna (Rebecca Ferguson) and their comely young nanny Megan (Haley Bennett). Rachel is obsessed with their seemingly perfect lives, and resents that she’s no longer part of any of it. But after one particularly dark, alcohol-soaked episode – during which she rages against the very people she watches daily – Rachel awakens bruised, bloodied and without any memory of what happened the night before.

Waking up to the news that Megan has gone missing suddenly seems more than a little coincidental, and Rachel starts to wonder what she might have done while drunk. This sets in motion a whodunit mystery – where’s Megan? And what, if anything, did Rachel have to do with her disappearance?

On the surface, the story seems ripe for some edge-of-your-seat suspense, and it’s obvious the filmmakers thought they were crafting something very much in the Gone Girl vein. But I LOVED Gone Girl and this, friends, is no Gone Girl.

Flat and dull, the “action” plods along at a glacial pace, jumping back and forth in time and between different characters’ points of view. Most of the story is told from Rachel’s POV and, for the first bit anyway, we also get to hear how Megan and Anna see things, but both of those latter narratives vanish pretty quickly. Despite a super-sluggish unraveling of the “secret,” and the fact that I hadn’t read the book prior to seeing the movie, I nonetheless was able to crack 90% of the case – the who and the why – almost immediately. The only thing I couldn’t figure out was the how, and that reveal was (for me) mostly effective.

Blunt’s Rachel spends the entire movie red-eyed and miserable, alternately sad, depressed, desperate, panicked, angry or vengeful, and it gets exhausting after a while. The performance is good and definitely a departure for Blunt, but it’s also non-stop suffering, which doesn’t make for a very entertaining experience for the filmgoer. If we’re meant to feel bad for her situation and to cheer when she rallies… well, she needs to rally.

The supporting players are fine, but their characters all feel very two-dimensional. Each one is made to seem simultaneously innocent and guilty, but it comes off as a distraction ploy (“oooh, is she nice or a killer? is he nice or a killer?”) that gets annoying after a while. Even the always-great Allison Janney seems to be phoning it in as a police detective instantly CONVINCED that Rachel is behind everything. Throughout The Girl on a Train, I found myself checking my watch. My filmgoing pal thought it was because I was anxious about getting out in time to catch my bus home. In reality, it was because I was bored and wondering how much longer I’d have to wait before the movie would draw to a decidedly meh close.