BOOM! The building shakes, the lights flicker, and the movie gets rolling.
By Lindaon August 15, 2013
0 Comments
Our Rating 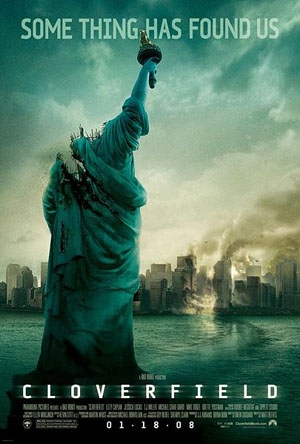 As my friend and I left the advance screening of Cloverfield, JJ Abrams’ latest production (note: NOT direction), we suddenly found ourselves paced on the sidewalk by a wide-eyed fanboy. He looked at us sheepishly—and more than a little excitedly—and asked, “Did you guys just get out of Cloverfield?” Uh…. yes. “It was AWESOME! Do you know about the full backstory behind the movie? Did you know that there have been over 20 websites running for months, revealing the backstory little by little? Did you know that if you bought a t-shirt on this one site, and if you were the 100th person, they’d send you a handwritten note in Japanese, that you would then have to translate to find out the history that goes all the way back to 1945? Do you know about SEA NECTAR?” Um. No. Excuse me?

Let’s just say, without being a fanboy, or having even glimpsed any of these websites that this excitable guy was extolling, you may still find Cloverfield entertaining for what it is: A fast-paced relentless monster movie. That is, unless you bend over in your seat and vomit on the floor first. Take note: The movie’s gimmick is that its point-of-view is via a hand-held video camera. For example, take Moviepie Vickie’s email that she sent me the next day:

Subject: holy hell
HOW did you last all the way through “cloverfield”??????
i was queasy 10 minutes in, spent the next 35 minutes with my eyes mostly closed, and finally left — totally green — at the 45-minute mark.
and i don’t feel like i missed anything.
though i would like the world to stop spinning now.
:-X

If you couldn’t (literally) stomach The Blair Witch Project, it may be in your best interests to stay away from Cloverfield.

Now that we’ve got that out of the way, let’s get to the movie itself. As an efficient thrill-ride, Cloverfield is surprisingly effective. We tap our watches through the opening scenes, where a bunch of pretty 20-something Manhattanites are throwing a going-away party for their friend Rob (Michael Stahl-David), who has an amazing VP job awaiting him in Japan. Rob, one tip for you: Shave. I have a sneaking feeling a Japanese company will kick a white-boy “VP” to the curb if he shows up with an eternal scraggly one-week beard. Really. Anyway, gossip about hookups and broken hearts fly about the room as Rob’s pal “Hud” (T.J. Miller) films going-away messages for his pal via our point-of-view—the video camera (which he claims to not know how to use… coulda fooled me!). Then BOOM! The building shakes, the lights flicker, and the movie gets rolling.

Clocking it at a brisk and extremely busy 75 minutes, Cloverfield doesn’t overstay its welcome. Character development is an afterthought, as we run with a handful of partygoers for our lives. They are all young and pretty and say, “OHMYGODOHMYGODOHMYGOD!!!!” a lot (remember, it’s PG-13, not R rating). They slowly get picked off one by one, which is lucky, since they are kind of interchangeable at first. And occasionally they, and the audience, pause for a breath, if only to bend over, put their head between their knees, and try not to puke.

But the clever thing about Cloverfield is that we only know as much as the camera (aka Hud and friends) sees. There are glimpses of things out of the corner of your eye, the camera shakes and spins, and you can’t seem to see what’s going on, chaos erupts and people run screaming, buildings and bridges collapse. The CGI looks great, in no small part because we can’t seem to actually see anything long enough to focus. It’s all pretty cool, chaotic, and pretty scary… except when you pause for just a second and realize much of the unknowable horror reflects a certain day in September in Manhattan, not too many years ago.

Cloverfield may not be a brilliant horror movie, nor particularly clever (backstory notwithstanding… for those not in the know, there are plenty of plot holes). But it sure is a heck of a good ride. During one particularly frightening moment towards the end, the audience held their collective breath until… one guy suddenly exclaimed, “That was AWESOME!” Yep, there is some awesomeness to be had in this popcorn movie, gimmick or no.

Surprisingly, the extras on the Cloverfield DVD are pretty run-of-the-mill. There is a half-hour or so behind-the-scenes featurette that just shows how top secret the production was, and how the whole cast and crew basically wanted to make out with JJ Abrams when he showed up on set. There are a couple of alternate endings which vary very little from the final cut, some deleted scenes that add nothing, plus some outtakes of the actors busting up laughing. There is a feature commentary by director Matt Reeves as well.