The bulk of the film made me squirm in my seat, but the ending was so wrenching that it almost made the whole thing worthwhile.
By Jenniferon August 15, 2013
0 Comments
Our Rating 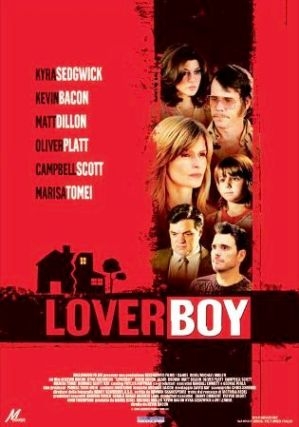 When it comes to independent films, it seems I’m always complaining that there is no ending, or at least no sense of resolution when the credits roll. Loverboy is just the opposite. The bulk of the film made me squirm in my seat, but the ending was so wrenching that it almost made the whole thing worthwhile. Almost.

Kyra Sedgwick stars as Emily, an intelligent but eccentric woman whose only dream in life was to have a child. After various attempts at artificial insemination and many anonymous encounters with random men, Emily finally gets her wish after a one-night-stand with a charming businessman named Paul. Paul is played by none other than Campbell Scott, and this makes for a fun little Singles reunion… if anything about Emily’s weird world can actually be called fun.

When Emily’s bundle of joy arrives, she names him after the father he’ll never know, but calls him Loverboy. Her entire life revolves around her son, and they spend their days exploring and pretending, often camping out in the backyard, or digging for treasure in the garden. They speak in perfect English, avoiding contractions at all times, and relying heavily on formal words like “must” and “perhaps.” In short, they are typical home school oddballs. Emily’s devotion would be commendable if it weren’t so stifling, and if it didn’t seem so alarmingly like a bona fide love affair. Imagine your mom showing up at the playground and calling, “Oh Loverboy!” She never does anything pervy to Paul, but she’s clearly looking for him to fill a bigger void than any child should have to.

All of this begs one question: why is Emily like this? The fact that her parents (Kevin Bacon and Marisa Tomei) were wacko lovebirds who treated Emily like a third wheel might have something to do with it. Through a series of weirdly amusing flashbacks, we see that they were so busy fawning over each other that they couldn’t be bothered with young Emily (Sosie Bacon). However, they did have the good sense to be offended when Emily performed an a cappella version of Bowie’s “Life on Mars” at a school program. Even then Emily seemed desperate to escape to another world. She sought comfort in her beautiful neighbor, Mrs. Harker (Sandra Bullock), but even she moved away. Having a child meant finally having someone for herself, but she never counted on Loverboy wanting to spread his wings.

When Loverboy (“My name is Paul!”) begins looking longingly at the school bus, Emily does everything in her power to distract him. They pack up for a weekend by the sea, and Emily is horrified when a friendly neighbor (Blair Brown) encroaches upon them with a dinner invitation. The nerve! When a friendly geologist (Matt Dillon—also from Singles!) offers to take Paul fishing, she’s overcome with jealousy and anxiety. A few good friends might be just the thing to compensate for the vacuum Emily and Paul live in, but this is not to be, and once Paul finally gets to go to school Emily really gets squirrelly. She butts heads with the well-meaning staff (including Oliver Platt), and begins making up stories about illness and allergies to keep Paul out of school.

Since Emily’s always competing with the world for Paul’s attention, you’re thinking it’s just more of the same when she starts teaching her six-year-old to drive. Undoubtedly she’s just trying to prove that the things they do are way cooler than anything that goes on at school… right? When her true motive is finally exposed, it is so shocking, so heart-wrenching that you can barely breathe. The ending is powerful enough to elevate Loverboy above the ranks of movies like Riding the Bus With My Sister, but I’m not sure I can describe it as entertaining. Despite the talent of all involved, it’s often difficult to sympathize with Emily, and much of the film is either mundane or cringe-inducing. Catch this on cable or pick it up at the library, but don’t beat down the doors at Blockbuster for Loverboy.