This Is the End

This apocalyptic stoner comedy from Seth Rogen and friends delivers exactly what you think it will… and, depending on your expectations, that’ll be a good thing or a bad thing. 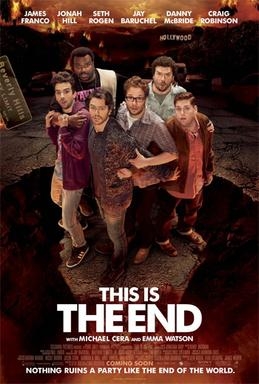 For me, it was the latter. On the upside (?), I didn’t hate it as much as I thought I would. And it would seem that I’m in the minority. Go figure.

It’s no secret that I am definitely not the target audience for this wildly self-indulgent, directionless escapade that revolves almost entirely around smoking weed, getting high, cracking sex/dick/masturbation/rape jokes and behaving like 14-year-old asshats who want to see just how much they can get away with before a grown-up notices and promptly shuts it down. So, it likewise shouldn’t be a surprise that I really didn’t enjoy it.

The “plot” of the movie is thin at best: Hollywood pals Rogen, James Franco, Jonah Hill, Craig Robinson and Jay Baruchel (all playing douchier versions of themselves) are “partying at Franco’s” one night when they suddenly find themselves face to face with the end of the world. Fires devour the city, the skies turn black and all Hell literally breaks loose. What follows is essentially the core quintet – plus obnoxious, thorn-in-their-side tag-along, Danny McBride – doing whatever they can to survive.

Rogen and co-writer/co-director Evan Goldberg have said many scenes were improvised – bad news, fellas: it shows. And not in a good, aren’t-those-chaps-clever! way. Unlike Pineapple Express (which I thought I would hate but actually loved) or Superbad (which I didn’t really like but about which I still found merit), this movie feels very much like a bunch of stoned frat-boy idiots sitting around trying to make each other laugh, instead of the result of any kind of story or plot development. It’s super-insular and none of the characters are particularly likeable, which makes it hard to care what happens.

I will say this, however: I did laugh out loud a few times, and I actually found James Franco (whom I normally don’t enjoy) surprisingly good. The cast’s celebrity friends – including Mindy Kaling, Aziz Ansari, Kevin Hart and Jason Segel – also turn up for a slew of entertaining cameos, and Michael Cera’s brief-but-memorable appearance was enough to earn … The End an extra slice on its own.

Otherwise, though, there isn’t much here for folks who fall outside of a very slim film-going demographic.