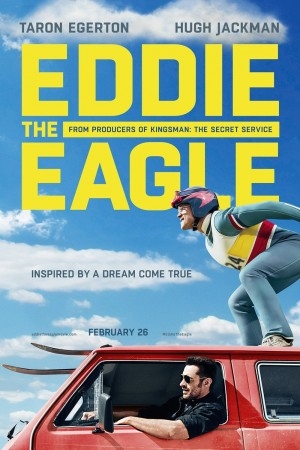 The reason there are formulas in movie plots is because they are tried and true, and they really work. If you’ve seen or enjoyed any–and I mean ANY sports-themed movies–you know they start with scrappiness, then a dream, then the agony of defeat, but then wait! There is a training sequence, then unexpected (read: expected) triumph! Eddie the Eagle is not any different, but what is fun about the movie (and about Eddie “The Eagle” Edwards’ real-life story) was that Eddie did not walk away with the gold medal in ski jumping, representing England in the 1988 Calgary Olympics… he simply LANDED without wiping out. His infectious joy at this seemingly simple achievement spread around the world, and he became one of the darlings of that year’s games.

I remember watching the 1988 Winter Olympics with my brother, and we were infatuated with ski jumping. We loved announcing to the TV, “Next up is… Matti NoooooKÄNEN!” when the Flying Finn wowed the crowd by floating seemingly forever when he launched off the jump. And we loved Eddie the Eagle from England, who had Coke-bottle glasses, a jutting chin, and a little moustache, and just looked SO happy to be there! Heck, why shouldn’t he? He was an OLYMPIAN!

In the film, we meet young Eddie as he is getting a leg brace removed. He is obsessed with the Olympics as he grows up in 1970s England. He wants to be an Olympic athlete, but just has to find his sport (cue montage of klutzy accidents). Strangely, by the time he is a teen, he falls into skiing (you are correct in that England does not have a lot of hills, nor snow, so he is practicing on an artificial snow slope). He doesn’t make it far in the Olympic tryouts (it is implied that the British Olympic committee doesn’t want to be embarrassed by entering a team that may not be competitive). He finally comes across ski jumping. It has all the potential: There has been no British jumper for some 60 years, and the rules about qualifying are non-existent. Eddie figures he just has to be able to prove he can fly off a jump without breaking his next, and he’ll be on the Olympic team. (And he is pretty much right.)

Taron Egerton plays Eddie, with his jutting under bite, constantly pushing his thick glasses up his nose. He would seem like a caricature if you didn’t know that his performance isn’t actually that much an exaggeration. Eddie is sweet and earnest, without being a dim bulb, so you can’t help but root for him (especially knowing how ridiculously dangerous the sport is). Hugh Jackman, all sexy in jeans and rolled up shirt (and flask always in hand), is washed up U.S. jumper Bronson Peary who becomes Eddie’s reluctant then (wait for it) enthusiastic coach. And watch for Christopher Walken, as legendary U.S. coach, Peary’s disappointed mentor, and author of “My Life in Ski Jumping” (the book cover is instant hilarity in its weirdness).

The thing is, formula movies know how to get to you. They make you laugh, maybe get a little misty-eyed, and make you cheer, just like my audience did when Eddie landed his jumps. Who doesn’t love cheering for the come-from-nowhere underdog? Eddie the Eagle, just like the man himself, is a feel-good story of following your dreams.

There are about 46 minutes of featurettes called “Let the Games Begin” which delves a little deeper into the story of the film, and a bit into Eddie himself. The screenplay languished for years since the inspiring true story, and when it was finally picked up, director Dexter Fletcher and producer Matthew Vaughn (whom you may recognize from British gangster films) wanted to make an earnest, uplifting family movie. Everyone had their doubts casting handsome Taron Egerton, fresh off Vaughn’s Kingsman: The Secret Service, but even Eddie himself, visiting the set, was totally impressed by the transformation. These extras are often as cute and sweet as the film itself, as Eddie presents shock at meeting Hugh Jackman, because Hugh wanted a selfie with HIM!