I still think I can live the rest of my life without seeing another Marvel origin movie, but I’ll give Deadpool credit where credit is due: It certainly made me laugh, with its no-messing-around full-on R rating, accommodating sex, drugs, blood, severed arms, and endless penis jokes.
By Lindaon July 12, 2016
0 Comments
Our Rating 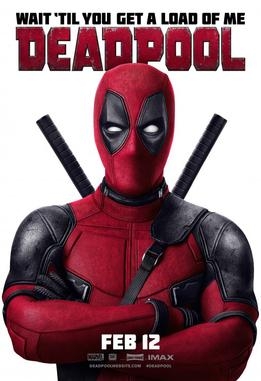 Wade Wilson is a wisecracking pretty-boy mercenary (played by wisecracking pretty-boy Ryan Reynolds, who finally seems to have a role that fits him like a red leather bodysuit). He runs in dangerous circles, but the first true threat to his livelihood of killing people for hire and going home to the love of his life, the prostitute-stripper-waitress (???) Vanessa (played by sassy Morena Baccarin) is his diagnosis of untreatable cancer.

Rather than having his lover watch him decline, Wade flees to the shady promise of a cure in the form of a brutal treatment that will pretty much destroy him in order to make him invincible. Let’s just say that Wilson’s good looks are replaced by the skin of an avocado, but in return, the cancer is gone and nothing can kill him. But Wade Wilson, aka Deadpool is pissed, and wants to enact revenge on the one person who may be able to cure him from his “cure” so he can finally return to his lady love.

SURPRISE! Deadpool is an origin story. And in the above paragraph, the story sounds straight-faced and by-the-(comic)-book, which it is. But let me tell you, Deadpool, the character and the movie, is OBNOXIOUS. The jokes fly fast, both verbally and visually, often breaking the fourth wall. This movie is definitely aimed toward adults, not the tots that will most likely want to see it.

I’m the first to admit rapid-fire self-referential delivery gets kind of exhausting, as I’m one of those that got Marvel-ed out a long time ago. But I appreciated the smirky references in the film, mocking the very genre that Deadpool so squarely lands in. The dialogue has blatantly adult, chortle-worthy humor, which is strangely refreshing when people are running around in leather bodysuits, and there is an action climax that honestly looks like it could have been lifted from any other Marvel film. Take note, filmmakers, of what a clever script can do!

And one more thing: I predict right now that my year-end list will include some mention of Deadpool’s “baby hand”. It is difficult to explain, and even more difficult to unsee, but it had me laughing harder than probably anything I’ve seen in any comic book movie ever.