Chadwick Boseman sinks his (enormous, false) teeth into the role of the Godfather of Soul in this choppy but engaging biopic of legendary entertainer James Brown. 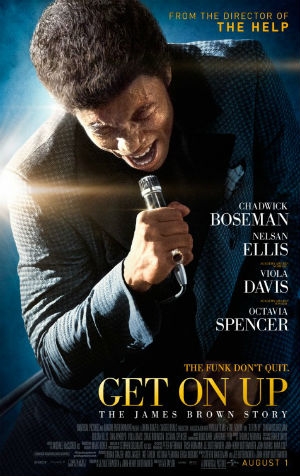 Unfolding in a not-entirely-successful, sort-of-confusing, non-linear fashion crafted by director Tate Taylor (The Help), Get On Up tracks Brown’s rise to fame, from his turbulent childhood and abandonment by his mother (Viola Davis), to his early days alongside longtime friend and collaborator Bobby Byrd (Nelsan Ellis, True Blood), his eventual ascension to worldwide fame and icon status… and his subsequent descent into drug addiction, erratic behavior and domestic violence. (Though, the negative side of his life and career in later years are only given passing attention.)

Boseman is electric as Brown, especially in the numerous performance sequences that feature Brown’s iconic style and footwork. By film’s end, he’s morphed into the bouffant-‘do-ed legend to such a degree that you may find yourself doing a double take. His co-stars, especially Ellis as the loyal but beleaguered Byrd, are all strong, though Davis and Octavia Spencer – as the key women in Brown’s early life – could have used a bit more fleshing out.

Where the film stumbles, though, is in its execution. Taylor opts to have the narrative keep jumping back and forth in time, so that one minute you’re watching Brown as boy, the next he’s a grown man, then a teen, then a grown man again, then a boy… and so on. Worse, Taylor cuts from one era to another often at the expense of the emotional impact of a given scene. When Brown’s long-estranged mother shows up on the scene after decades away, for example, the two see each other and then, poof!, the film jumps back in time… and then to an inexplicable point in the future. And it doesn’t return to the reunion scene for what feels like a very very long time, by which point the punch it would have packed has kind of evaporated. The constant leaps through the years also make it difficult to pinpoint exactly when some sequences take place… and also leaves some of the supporting players in the dust in the meantime.

The problem may be in trying to condense Brown’s extensive life and career into just over two hours. With so much source material, and so many individual stories to tell, it’s almost inevitable that details will be lost. Brown’s relationships with his wives are somewhat glossed over – his second wife (Jill Scott) just kind of vanishes along the way – and his drug use is reduced to one quick shot of him pouring a little PCP into an unrolled cigarette. If you didn’t know the particulars of Brown’s life going into the film, you likely wouldn’t know too many of them on the way out, either.

Still, the film is about Boseman, who proves once again that he can disappear into his characters. In this case, Get On Up and the large-livin’ Brown give him ample room to strut his stuff and show off his skills, and that’s reason enough to check it out.