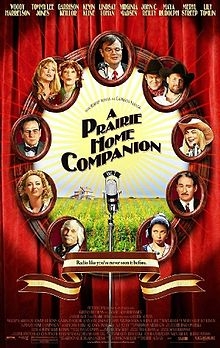 Really, the above five statements are about all you need to know to enjoy director Robert Altman’s understated, down-home look at the fictional final broadcast of Garrison Keillor’s real-life titular radio show. The actual broadcast has been going on for more than 30 years, and still originates out of Minnesota, so it’s no surprise that the movie embraces the tried-and-true tradition and sentiment that have made the program so well-loved.

A potpourri of well-known actors populate the cast, each playing a different quirky regular on the “Prairie Home Companion” show. There are singing sisters Rhonda (Lily Tomlin) and Yolanda (Meryl Streep), who have been a performing pair since they were girls; Yolanda’s grim teenage daughter (Lindsay Lohan), who writes poetry about suicide; amiable faux cowboys Dusty (John C. Reilly) and Lefty (Woody Harrelson), who combine music with comedy; and Keillor himself as the methodical, calm, velvety-voiced grand marshal of this parade of eclectic talent. One after another, the performers take the stage, to belt out a classic or try out something unique, and it feels a bit like sitting in on a small-town talent competition…only with really, really talented talent.

The crux of the story is the fact the theater housing the radio broadcast is to be torn down, so everyone’s gathered for one last hurrah before the wrecking ball levels the place. This adds a nice undercurrent of melancholy and nostalgia to the proceedings, and makes moments like Rhonda and Yolanda’s song for their late mother, or the all-star final number, that much more poignant. The cast is, not surprisingly, terrific. Streep and Tomlin bounce off each other so effortlessly it’s like they’ve worked together for decades, Lohan manages to do a decent (though not exceptional) job of holding her own, and Harrelson and Reilly are particularly entertaining (a special tip of the Stetson to their “Bad Jokes” ditty!). Even Maya Rudolph manages to take a throw-away role as the stage director and turn it into something memorable.

Where the film makes an odd misstep, in my opinion, is the supplemental storyline involving Kevin Kline as a 1940s-esque private eye who bookends the film with his narration, and a miscast (or misdirected) Virginia Madsen as an otherworldly character dressed all in white who drifts in and out of the action, and who’s so stiff it almost seems like she’s in a completely different movie. I understand the point of her character (and Kline’s for that matter), but she stuck out like a sore thumb and came off as borderline animatronic. Neither one of them was needed, and the movie would have been fine standing on its own without them.

Otherwise, everything about APHC fits together tidily like a patchwork quilt. Each square is special in its own way, and when you put them all together it’s something you just want to curl up with on a cold, snowy night. 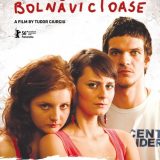 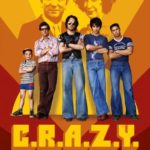