With its dry, dusty Texas landscapes bathed in gold and soaked in beer, this bank-robber road movie is as enjoyable as it is profoundly sad.
By Lindaon December 9, 2016
0 Comments
Our Rating 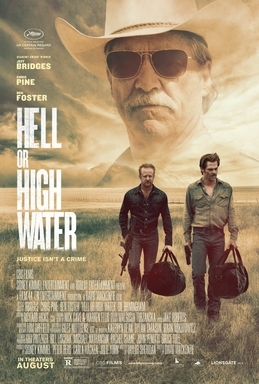 Two brothers, Toby and Tanner (Chris Pine and Ben Foster) set out to rob a bank in their small Texas town. It initially seems pretty benign, as they simply follow the morning teller in from the parking lot, after she has put out her cigarette. But these two men with stocking masks pulled over their faces still betray menace and desperation as they wield their guns, emptying only the drawers and not bothering with the safe. When these two Texas boys hit another couple Texas Midlands banks in very short succession, Texas Marshalls Marcus (Jeff Bridges) and his partner Alberto (Gil Birmingham) are quickly on the case, sussing out the brothers’ pattern with clever logic and more than a bit of curiosity at the brothers’ motives in the series of relatively small-beans robberies.

Small robbery scores quickly turn to greed and violence, especially with wild-card Tanner, just out of prison after ten years. Ben Foster could easily have portrayed Tanner as a crazed lunatic, but he has a soft spot for his quiet brooding brother Toby, plus leftover charm for the ladies. When Tanner explodes, though, even his brother steps back in shock. Toby doesn’t say much, but his troubled eyes betray hesitation and sadness. You quickly get the sense that the men need “just enough” money for something, but when Toby’s motives for the heists are revealed, it is profoundly sad and also infuriating.

Without giving away the slow reveals in the plot, I have to say that Hell or High Water is one of the most vividly American films I’ve seen in a long time. It takes bits of style from classic Westerns, combines it with a buddy movie, and peppers it with beer, guns, and swaggering masculinity. But all of these elements are faded and washed out, not only by the gorgeous cinematography, but the land and the towns themselves. Bailout and For Sale signs pepper sad little houses with dead lawns. There aren’t a lot of people in the towns, and everyone looks weathered and beaten. You may as well see a tumbleweed of despair roll down Main Street.

The brothers in the film are not really heroes. They are more like drowning men that hold up a middle finger to stick it to the man before the quicksand pulls them under. Whatever they achieve leaves carnage in its path. Though there are no good answers to the problems that they face, their solution seems as good as any these days. And that in itself is a tragic reflection of these times.