Critics have fallen all over themselves left and right to make out with The Queen. You can’t fault them, really, since The Queen stars the super-sexy Helen Mirren as HRH QE2 herself, Queen Elizabeth II. But it is improper to think of the queen as sexy (that duty is left to glamourous princesses)—Mirren’s allure is covered up in sensible clothes, country shawls, and occasional rubber boots. Her tartness, however, remains—as is evidenced by the fabulous opening shot of the queen getting her portrait taken. She is asked to turn her head to pose, and she looks directly at the camera, completely deadpan, but with one eyebrow ever-so-slightly cocked. There’s our Helen. 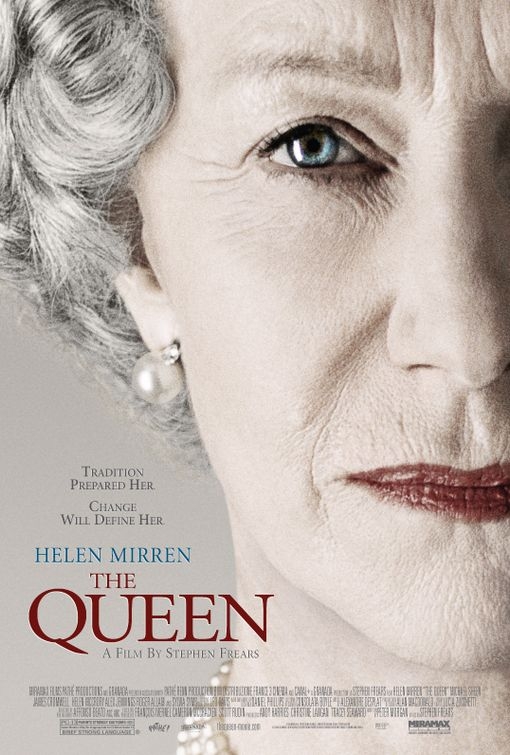 The Queen covers that fateful week in 1997 when everyone (including the royal family) first heard the news of Princess Diana’s death in a car crash in a Paris tunnel, to the princess’ elaborate funeral a week later, a first for an ex-royal. Like many of us, the royal family and Tony Blair (Michael Sheen) were glued to the TV news as the story unfolded. As played in the film, the family has varied responses to the news. Prince Philip (the hammy James Cromwell) is an ass and is completely dismissive, Prince Charles (Alex Jennings) is a bit bumbling and afraid of his mum’s cold response, and Elizabeth herself seems to just want the whole incident to go away, so that the press and the public will stop demanding a public show of grief by the royals (how undignified!). Freshly in office, Tony Blair seems to be the only one that sees how greatly important it is that the royals acknowledge the public’s despair over losing their beloved princess.

Diana is shown only in newsreel footage, and the young princes are always hurried off camera so that we never see their faces. But the rest of the lot are fair game. Charles and Philip bumble around like a kid afraid of his mom, and a pompous buffoon, respectively. Meanwhile, the queen holds court with thin, pressed lips and determination, until she finally acknowledges that Blair may have a point. No one would dare say that she caved to pressure. In fact, though The Queen is practically a comedy, Queen Elizabeth comes out of the film with her dignity intact, just like she did after the actual events unfolded.

Overall, The Queen has to play like more of a “what if?” movie than an actual document of events. Is this what went on? We know that the royal family isn’t going to talk. Considering that most of the events happened behind the privacy of closed doors, occasionally moments in the film reek of dramatization for the sake of coloring the story. We’d like to think that the queen was able to break down only when she was alone, off-roading in the wilds of Balmoral. We wonder if a nervous Charles would prank Blair, looking for a kindred spirit. And the repetitive subplot of a beautiful wild stag that Philip and the boys go “stalking” every day in Balmoral is distracting and unnecessary.

But if you were old enough to remember the worldwide media frenzy and grief surrounding Princess Diana’s death in 1997, you will undoubtedly find much of The Queen fascinating. The news footage and interviews spliced into the film still gave me chills, and when Elizabeth finally makes a public announcement on television, I found myself saying, “Yes, it was exactly like that…”—from the view of the Buckingham Palace grounds filled with the public in the background, to the Queen’s stiff, yet surprisingly comforting words. The Queen reminds us that despite her popularity with the public, Diana was the EX-daughter-in-law of a family who was expected to publicly mourn her. That is a tough position for any family, royal or not.

The DVD of The Queen includes the required “Making Of” featurette and commentary by director Stephen Frears. But with a royal wave and tip of the hat in respect towards Her Royal Highness herself, we are also treated to an insightful commentary by British historian and royal expert of 30 years, Robert Lacey (author of Majesty: Elizabeth II and the House of Windsor). Including an academic commentary is a nice touch; just another way that The Queen rises above its tabloid-fodder source to be a surprisingly respectful portrayal of the monarch.