The World’s Fastest Indian is a perfectly charming movie that is saddled with probably most confusing film title in recent memory.
By Lindaon September 2, 2016
0 Comments
Our Rating 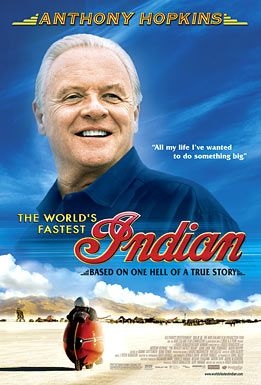 Is this about a Native American racing atop his pinto pony in a Hidalgo-like adventure? No. Not at all. Give the film credit though: Whenever Anthony Hopkins’ character mentions his “Indian” to strangers, they give him the same uncomprehending look that most people will give this movie’s poster at first glance.

So let me clarify: Hopkins plays New Zealander Burt Munro, an old fuddy-duddy that likes to wake up in the morning and pee on his lemon tree, to the alarm of his suburban neighbors. He basically lives in a converted garage, where he tinkers with nuts and bolts, and pours hot metals into molds to create new parts for his… Indian. This “Indian” is not a transformer robot in the image of Geronimo, mind you, but is in fact it is a classy old 1920s motorcycle that he had modified over the years to become quite a bizarrely speedy little number. Crazy old Burt is convinced he could even set a land speed record on the thing, if he could just get himself to the Bonneville Salt Flats in very very far away Utah, USA.

As this is based on a true story, Munro does indeed get to Bonneville for the speed trials, but the film takes its time getting there. The World’s Fastest Indian, for the first half, is your classic road movie across America. Burt is a little naive, being from a tiny country that most 1960s Americans have never heard of, but he is a kind and open soul. In the best road movie tradition, he makes friends with an assortment of characters, including a transvestite, a widow, a military boy, and, yes, a real live Indian. All help him get to his destination.

As much fun as the first half is, the movie comes alive in the second half at Bonneville, where Burt and his motorcylce are more than a little bit the oddest team to show up for the trials. It is not a surprise that he becomes the spirited (if somewhat deaf) hero to the young bucks who live for speed. The speed trials portrayed in the film are fascinating… heck, I’d like to go watch! Shooting across the desert like a slingshot, hoping that your body parts won’t rip off in the wind—well, now, that’s a little bit insane. It’s like the ultimate drag race, with the clock as your competition.

The World’s Fastest Indian will appeal to folks that enjoyed movies like October Sky and The Right Stuff. Though he is the least likely speed freak out there, Burt Munro and his crazy dream will probably end up inspiring you, much in the way he touched the lives of others while following his own dream. 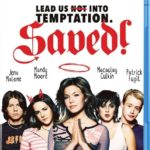 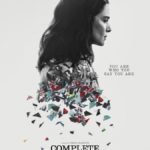