It was a very grey and rainy day today, which meant audiences arriving for screenings wet from the knees down and with drippy umbrellas in tow. In some cases, having to stand outside in the rain while waiting in line. Spirits, though, were not dampened… even though two of my three films wound up being a little less than bright and glorious. 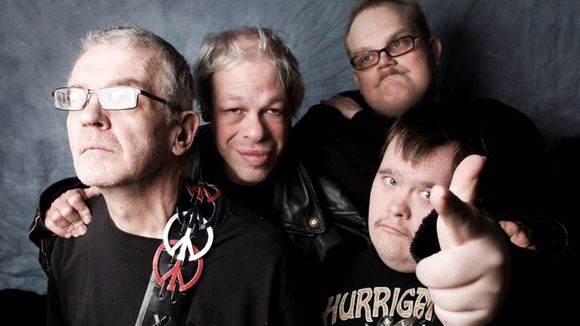 I began the day with The Punk Syndrome (2/8), a film I almost walked out on because I found it uncomfortably exploitative of its subjects: a Finnish punk-rock band comprised of mentally challenged adults. I’m not sure what the filmmakers set out to make – my guess would be some kind of “slice of life” look at the band – but the result was extremely disappointing. For starters, there’s no context provided for the audience. Who are these guys? How and why did they decide to start a punk band? What do their families think? How many of them even have families? (From the looks of it, only one does.) By leaving all that stuff out, the only thing we know about them is that they’re mentally challenged. And having that be their sole defining trait strips them of three-dimensionality. The editing and assemblage of the film is also very sloppy. Hair styles and weather change from scene to scene, back-to-back, so that one moment it’s summer, then winter, then summer again. Hair is long, then shorn, then instantly long again in the next scene. It makes it hard to find any discernable chronology of events.

Worst of all, though, I felt the filmmakers repeatedly, and needlessly, compromised the dignity of the band members. When lead guitarist Pertti defecates in his pants just before the band is slated to leave for a gig, it’s not only discussed (his group-home counselor implores him to bathe and change his underwear), but Pertti is then shown, fully naked, in the shower trying to clean himself. And, seemingly, this is played for laughs. Why was this in the movie? What does a scene like this possibly add to what’s purportedly a documentary about a band? And who signed off on its inclusion, since Pertti, though and adult, is clearly not mentally capable of making that call? Guaranteed, no adult I know would want something like that shown in a film, let alone the full-frontal follow-up that was entirely gratuitous. There are other similar scenes in the film – one band member loses his pants during a Special Olympics-esque event, Pertti is filmed trying to explain what having sex means, lead singer Kari (who doesn’t know where babies come from) is handed a VHS sex video and watches it – that had absolutely nothing to do with music.

And, unfortunately, the audience around me often laughed at stuff that was not at all funny. Pertti, clearly plagued by some kind of dark inner demons, talks about writing in his journal that he wants to stab himself and harm himself because of how much he hates himself, and people laughed. WTF? Though I repeatedly wanted to leave, there was a part of me that wanted to stay until the end so I could hear what the filmmakers had to say. But, when they brought Pertti and one of his bandmates out in front of the cheering audience, I knew there wouldn’t be any hope for revelation. So I left.

Heading to the Bader in the rain, I really hoped my second film of the day would be better. Tchoupitoulas had, after all, received all sorts of pre-Hot Docs buzz, having won awards at other festivals. Plus, it seemed right up my alley: a trio of boys wander the streets of New Orleans at night, taking in its sights and sounds. What’s not to love? 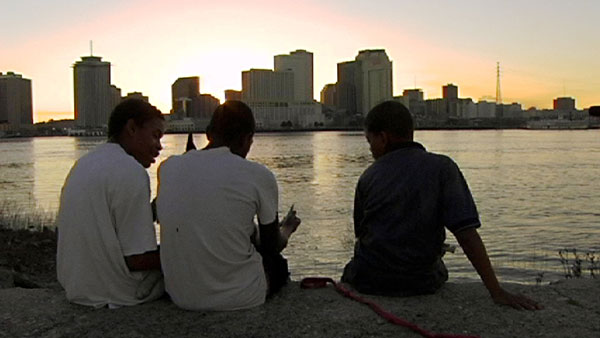 How about nauseatingly shaky hand-held camera work? Or perpetually muffled audio, so that dialogue all sounds like it’s being spoken through a pillow? Or a “documentary” that is, instead, actually just a series of images and sounds strung together without any narrative or direction? The last point is one that I admittedly think wasn’t hugely egregious, but (combined with the other two) made me eventually pack up my things and walk out. I just wasn’t engaged, at all, in the film and found its literal and figurative meandering frustrating. And I was not alone: at least 25 people walked out before me, and another three or four exited the theater while I was standing in the lobby chatting with a staffer friend.

Also, as a sidenote, at this screening I wound up sitting next to a smarmy, gross older man. He was maybe in his late 50s or early 60s, and he proceeded to try to impress me with all his credentials… all of which he “casually” let slip in the most obvious, look-how-fancy-I-am-as-I-drop-this-knowledge way. He is, he told me, a documentary-film producer. And a programmer for a festival. And the owner of a bunch of art-house theatres in the U.S. and Montreal. And he’s been to “SO many” film festivals, “Sundance, Cannes, you name it.” And he travels all the time. And he sees SO many movies. Eventually, I just looked away and started rolling my eyes with each new revelation. The more he talked, and the more he leaned into my personal space as we waited for the film to start, the more I wanted to leave. Plus, I couldn’t stop staring at the random whiskers he’d neglected to trim (a couple hanging over his top lip, a few sticking out from his lower lip, TONS of long nose hairs sticking out… guh-ROSS).

Me leaving Tchoupitoulas turned out to be a very fortuitous thing, though. Because, between that film and my final screening of the day, I wound up meeting Juliette Lewis and sharing a fun moment with her at the salad bar of the Yorkville Whole Foods. Now, as some of you know, Moviepie’s Jennifer is a HUUUUUUUUUUGE Juliette Lewis fan. So, when I looked up from the chafing dishes at the hot-foods bar and spotted a headphones-sporting Juliette Lewis browsing the vegetables, I did a doubletake. I knew she was in town, and had been for a while, shooting The Firm, and I knew I had to say “hi” for Jennifer’s sake. So, even though I would never do this to any celebrity under any circumstances (I’ve often seen the rich and famous at this Whole Foods, but never bother them), I walked over to her, tapped her on the shoulder and immediately apologized for interrupting her bulk-food shopping.

She was exceedingly gracious and kind and, after I explained that Jennifer was one of her biggest fans, she was the one who actually volunteered to have a photo taken with me so I could show my Moviepal. She undid her ponytail, fluffed her hair and leaned in close for a photo. Then she said, “Take another one!”, in case the first didn’t turn out. When she saw the second one, she said, “One more.” I apologized because I knew the camera flash would be drawing attention to us (and to her), but she said it was fine. So, we took three photos, I thanked her profusely and that was that. Then, later, after I’d eaten my meal and was on my way back out onto Avenue Rd., we passed each other again. I didn’t want to say anything, lest she think I was somehow following her. “Bye!” she said happily as she passed me. “Bye!” I replied. It was a really lovely, serendipitous encounter… and Jennifer has since freaked out that it happened. 🙂 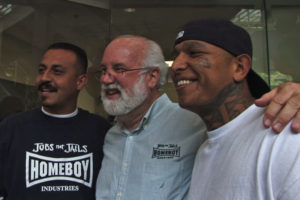 Thankfully, my final film saved the day from being a complete movie-going write-off. G-Dog (7/8) is a heartwarming and inspiring profile of Father Gregory “G-Dog” Doyle, who ministers to gang members in Los Angeles and who founded Homeboy Industries. G-Dog looks kind of like Santa and is a true testament to the power of living with a wide-open heart. Without an ounce of judgment or fear, he helps troubled youth and ex-cons and anyone who wants to turn his or her life around through counseling, classes and, most importantly, jobs. His motto and the Homeboy credo? “Nothing stops a bullet like a job.” With testimonials from graduates of his training programs, the film introduces us to G-Dog and some of his staff, almost all of whom are big, burly, tattooed ex-gang members, who now dole out hugs instead of hits, and who repeatedly express their affection for their mentor and each other. A moving and beautiful tribute to a really wonderful man.