What is WRONG with some people in the audience for these Hot Docs screenings? Bad behavior during a film, which used to be scarce (if present at all) during the fest, is now rearing its loud, ugly head more and more often. At one film, a couple arrived late (the film had already been playing for about 10 minutes), sat down right in front of me and proceeded to talk – AT FULL VOLUME. I was stunned. When they didn’t stop, I leaned forward and said, “Would you mind keeping it down, please?” Less than five minutes later, the guy sitting two seats to my left (who’d also arrived late) took out his smartphone and started texting. Then, a woman two rows up took out her BlackBerry and did the same… only she didn’t put it away and kept right on texting throughout the film. WHAT THE HELL?! I likewise can’t believe no one told her to shut it down and put it away! Do these people think they’re sitting in sound-proof invisibility boxes?! I’d like to implore the festival reps to make their pre-screening anti-device appeals more strident because people clearly aren’t getting the message. Please.

And then there was the clueless woman sitting behind me last night, who did not stop talking or knocking my seat for the entire duration of the film. CLUELESS, I say! 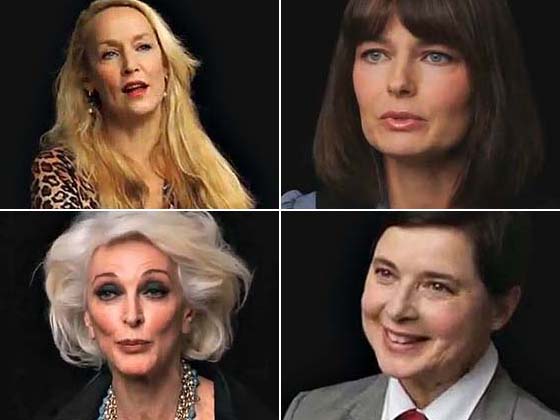 Thankfully, neither of the above offenses occurred at the screening of About Face: The Supermodels, Then and Now (5/8), director Timothy Greenfield-Sanders somewhat-scattered, interview-based film featuring some of the most well-known models of the 1960s, ‘70s and ‘80s. The exceedingly well-lit women – including Carmen Dell’Orefice, Paulina Porizkova, Jerry Hall, Carol Alt, Isabella Rossellini and Beverly Johnson – reflect on their careers and the industry, and discuss (however fleetingly) things like the objectification of women, the perils of a party lifestyle and what it’s like to age. Thing is, the film itself doesn’t hang together very well. It’s a bit like a random assemblage of footage that sort of moves from subject to subject, but it jumps around a lot so that any cohesive arc or narrative is never really achieved. While it was great to hear from women like the fabulous and frank China Machado and Bethann Hardison, the doc felt more like a fun vanity project than a true examination of the issues it claims to address. 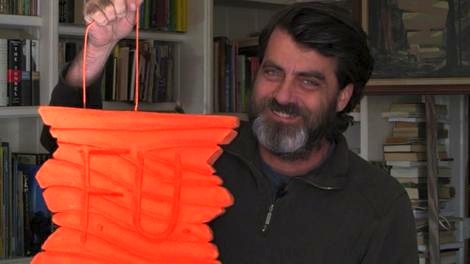 By contrast, Beauty is Embarrassing (7/8) was a bit like an unexpected and wonderful TED Talk. Having nothing to do with fashion or beauty, the film is a profile of prolific artist, puppeteer and production designer Wayne White, who’s perhaps best known for his weird, wacky and ridiculously creative work on the TV show Pee-Wee’s Playhouse, but whose life and career is so much richer and deeper than that singular series. Irreverent (his favorite response to critics is “f**k you!”) and undeniably brilliant, White is a testament to walking to the beat of your own drummer and, subsequently, reaping the rewards of being true to yourself and your own unique vision. The film also features never-before-seen backstage footage from …Playhouse, and interviews with White’s family and friends, including Matt Groenig, a bearded Todd Oldham (I almost didn’t recognize him at first) and Paul Reubens. Best of all, this is the kind of movie that, when it’s over, makes you want to immediately go home and draw a picture or write a poem or take a photo or just create something. As White says to a roomful of eager audience members in the film, we should all go out do something to make the world more beautiful.

One of the films I’d most looked forward to seeing was Brooklyn Castle (5/8), the story of a junior high school in Brooklyn that’s produced some of America’s greatest young chess players. As anyone who’s read my previous festival coverage – of Hot Docs and of TIFF – I love movies about kids and their dreams. LOVE THEM. And Searching for Bobby Fischer is one of my favorite hidden gems from nearly 20 years ago. So, when I saw Brooklyn Castle on the schedule, I figured it would be a sure thing for me.

Unfortunately, I didn’t love it. 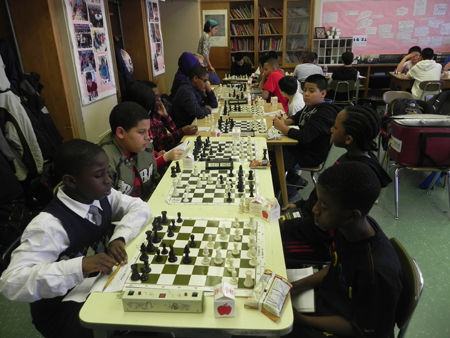 Fairly slow-moving and lacking any real tension (where do you go when the team is already #1 in the country at the outset?), the film introduces us to a number of students at I.S. 318, all of whom are gifted chess players and many of whom come from poor families. Their dedicated teachers, Miss Vicary and Mr. Galvin, are fabulous examples of the best of the country’s educators – driven, supportive and resilient in the face of academic bureaucracy that often hampers their efforts. In that regard, the film scores… though, we never really get to know either teacher, why they love chess so much or what their stories are. But, when it comes to the kids and the chess, it tends to drag a little… which is likely more a result of editing than the kids themselves. And there certainly are memorable characters among the pint-sized players, including Pobo, a charismatic eighth grader; Rochelle, one of only a few girls competing on the school’s team; and Justus, a seemingly sullen but incredibly gifted 10-year-old who almost never smiles.

At the post-film Q&A, the filmmakers explained that they hadn’t set out to make a “competition film,” but wanted instead to document how budget cuts threaten after-school programs like this kick-ass chess club. In that regard, the film falters. While the issue of budget cuts is definitely raised, all we see are the teachers and students reacting to the news of those cuts – where are the interviews with the government officials responsible for these cuts? Or any further stats about cuts around the country? In the end, the message seems to be “wow, isn’t this crappy?”. Of course it is, but the why is just as important as the what so, if the filmmakers really didn’t want to make a movie about the competitions, a little more attention to the politics and economics of the situation would have added valuable content to their otherwise quite pleasant, but not particularly compelling, documentary.