Let’s be honest: not every documentary is going to be a winner. Film is subjective, and one man’s treasure can be soundly trashed by another. These docs proved disappointing for me in one way or another… which doesn’t necessarily mean you won’t love them. It’s just that I really didn’t. 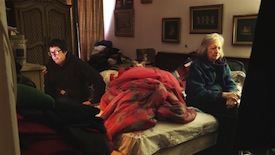 The Genius and the Opera Singer (3/8)
It’s feels like director Vanessa Stockley thought she stumbled upon the next Grey Gardens with the subjects of her doc: a wildly dysfunctional, bickering mother and daughter holed up in a small, hugely cluttered New York City apartment. Unfortunately, the resulting film feels exploitative, and to say its subjects are grating would be an understatement. Jessica (the middle-aged daughter and the “genius” of the title) is clearly very smart, but also might be on the autism spectrum and she literally screeeeeeeeches virtually everything she says… which is usually some sort of disparaging remark about her mother, the world, whatever. Her mother Ruth, a former opera singer, is 90 years old, still sharp and just as good as dishing out the scorn. Thing is, the film has no real point or direction aside from showcasing their erratic lives and, unlike Grey Gardens, isn’t really enlightening audiences about anything they haven’t seen before dozens of times over on reality shows like Hoarders. 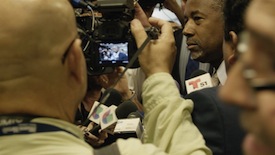 On the surface, this political doc sounded fascinating: a behind-the-scene look at the super PAC (political action committee) that supported U.S. presidential candidate Ben Carson in the 2016 election. Instead, perhaps capitalizing on the post-election zeitgeist, the resulting film feels like it was rushed into completion. It also seems as though the filmmakers started out thinking Carson might actually win the election (“let’s follow his road to the White House!”)… only to be left with a ho-hum scenario when that didn’t happen (“oh… okay, let’s… uh… make the film about the super PAC instead…”). As a result, PACMen is a fairly limp doc – there are no interviews at all, no insight, no explanation from any of the super PAC members as to why they are so vehemently supporting a guy who didn’t really want to run and, perhaps ironically, it’s almost completely devoid of people of colour. 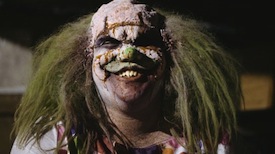 Spookers (3/8)
As a commercial for its titular haunted-asylum event company in New Zealand, Spookers is great. As a documentary, though, it’s really really not good. Disjointed, directionless, sloppy (onscreen typos included “Morman” instead of “Mormon”!), with waaaaaaaay too many reenacted dream sequences (?!) and clips of the venue in action (WE GET IT, YOU SCARE PEOPLE), it’s a film that sounds good on paper but falls apart in its execution. The filmmakers deliver half-hearted profiles and a woeful lack of follow-through on their most compelling threads. We’re introduced to a former asylum patient and nurse, but only briefly and seemingly without purpose. They were fascinating, so why just drop them in at random? Several cast members start to share their personal struggles, but never in depth, and there is no connective narrative tying any of it together. Just a whole lot of footage of troupe members trying to act scary while terrified guests shriek in horror. Over and over and over again. 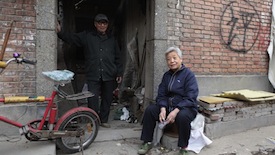 Generally, I’m not a fan of films about hardship without hope, and this documentary feels like it falls into that category. Set against the hypnotic backdrop of an abandoned garment factory and perpetually spinning spindles of thread, the film centers on two sets of elderly parents in a Chinese village, who are being forced out of their ramshackle worker-built homes. They’re all former factory workers, and while one couple is in relatively good health, the other far more frail and ill. As the parents cope with leaving their homes, their adult children bicker over their situation, their relocation and who, exactly, will care for whom. The problem is, none of it is overly interesting – it’s a bit like watching a long, depressing home movie, and it’s never fun to see the elderly crying. Going in, I wasn’t entirely sure what the movie was about, and still wasn’t sure by the time it was over.