Sometimes, when a Hot Docs screening is poorly attended, as an audience member you wind up being part of a small but privileged group that discovers something magical (see: my experience at Keep On Keepin’ On last year). However, as I discovered yesterday, other times it means you actually have chosen a film that your filmgoing peers have wisely decided to skip.

By the time my first film of the day began, there were all of 23 of us in the theater. I know because I counted. And, within the first 30 minutes of the film, four people walked out. Not a good ratio. Then, at one point about halfway through the film, the doc’s main subject says in the film (while watching footage that we, too, have just watched), “This is boring. Can we fast-forward?” I could not have agreed more. 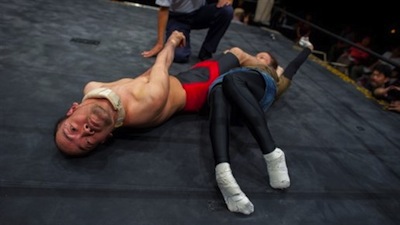 The film in question was Doglegs (2/8), a look at a wrestling-ish league for the “disabled” in Japan, and not only was it somewhat tedious to get through, it possesses a misguided belief that its content somehow empowers its subjects. It doesn’t. Rather, it presents the audience with a number of disabled competitors – from sad-sack Shintaro to clinically depressed Yuki and severely disabled alcoholic L’Amant – as they struggle to live their lives, inside and outside of the ring. More to the point, it showcases their seemingly endless string of disappointments: Shintaro is demoted at work, a perpetual loser in the ring and lovesick over an able-bodied woman (who clearly does not return his feelings); Yuki is a hoarder, and is covered in tiny scars and fresh wounds that (though never directly mentioned in the film) seem to be obvious signs that he’s also a cutter; and L’Amant – who cannot stand, walk or even feed himself – is enabled in his alcoholism by his family and caregivers, who shake their heads mournfully at his unfortunate condition… never taking responsibility for the fact that they are the ones giving him alcohol. It’s not like he can go out and buy a bottle, then pour himself a glass and drink it – it has to be fed to him. By them!

The doc features numerous long and repetitive fight sequences that do nothing to advance the story. We get the gist after the first 10 minutes. We never get to know much about these fighters outside of the fact that: 1. they’re disabled, and 2. they fight. What condition does Shintaro have? Or L’Amant? What are the rules of this league, since it also features able-bodied fighters pummeling their disabled opponents? What are the criteria for being admitted? And, though the message seems to be “good for you for just trying and getting back in again!”, that feels so condescending. Aside from a momentary glimpse of what this doc could have been, when the filmmakers insert a very short but 100% engaging interview with Shintaro’s elderly mother (who regrets how she treated her son when she was raising him, and gives the film one of its strongest moments), the film feels like something of a patronizing examination of these men and women (“being called a loser just makes you try harder!”), rather than a celebratory one. 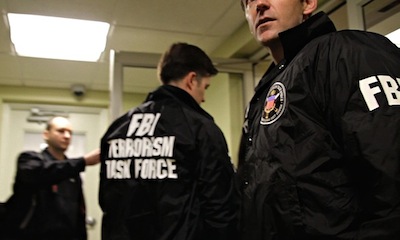 Next up was (T)ERROR (4/8), a film which its very-passionate co-director, David Felix Sutcliffe, introduced by saying (I’m paraphrasing), “I hope this movie makes you really f**king mad.” After which, he encouraged us not to stay in the theater and listen to him speak during the Q&A, but to instead take our anger with us when we leave. Huh? Kudos to the fest moderator for subsequently offering a sheepish, “But do stay for the Q&A!” thereafter.

It became obvious after the film, during that Q&A, that Sutcliffe has been personally affected by situations similar to the one featured in his film. He made an offhand comment about his co-director’s absence being related to something extremely troubling happening at home, but didn’t comment further (was she detained by authorities? denied entry to Canada? denied exit from the U.S.? who knows!), and became so overwhelmed with anger at one point that it seemed like he might actually start to cry. That kind of passion is fantastic, and having a clear agenda no doubt helpful when crafting a documentary, but, unfortunately, neither was particularly evident in the actual film itself. And I wasn’t entirely sure, based on what I’d seen, why I should be “really f**king mad.”

(T)ERROR is a film about a disgruntled FBI informant named Saeed, who’s spent years infiltrating suspected terrorist groups with the goal of nabbing would-be terrorists before they can do any harm. But he’s unhappy with how the Bureau has treated him, and decides to let the filmmakers document his latest undercover mission – er, without telling the FBI that he’s done so. (Tip: they’re the FBI. Pretty sure they had some idea, even if they didn’t say so.) What follows is unprecedented access to the machinations of an FBI operation, as Saeed befriends a young man suspected of promoting terrorism – but, to be honest, that suspicion is not without merit, given that this guy has posted his admiration for Osama bin Laden on his Facebook page, along with his support for al Qaeda and his desire to follow in their footsteps.

The doc purports to show how shady the FBI’s dealings are, and how informants – who are described as “sociopaths” in a telling piece of audio at the outset – often goad otherwise-innocent suspects into committing crimes, rather than simply gathering intel to assess the likelihood that a crime will be committed. And, in some ways, (T)ERROR sort of does that… but, by film’s end, I didn’t really feel very angry.

Saeed comes off as a grandstander who wants to be the star of his own movie, and is simultaneously so utterly exhausting and unlikeable as an interview subject (virtually every question he’s asked is answered with an angry, exasperated “why are you so stupid?!”-esque response) that I can’t imagine how endlessly frustrating it must have been to film him. He wants to be portrayed as the victim of the system, but (as we see) is anything but. And his target, meanwhile, is supposed to appear victimized by the authorities, but instead comes off as a delusional moron who really shouldn’t be as surprised as he is at the repercussions of his foolish online postings.

Again, it was clear that Sutcliffe and his co-director have personal ties to the issue of informing (he discussed a previous film he’d done about a 16-year-old girl who’d been targeted by the FBI), but the message they strive to deliver in (T)ERROR falls a bit flat.