Let’s pause for a moment to thank Mother Nature for the SPECTACULAR weather during Hot Docs so far – So nice! And, based on the extended forecast, it’s going to continue right through the end of the fest. No umbrellas! No sitting through films while wearing damp clothes! It’s been magnificent. 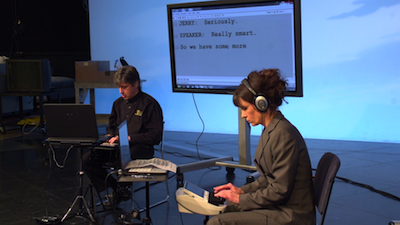 Less magnificent was my first doc yesterday, which wasn’t nearly as fun or quirky or interesting as it seemed in its description. For the Record (4/8) profiles a number of court reporters and closed-captioners, who discuss their work and careers, and their goals for setting a new Guinness World Record for speed (shooting for close to 400 words per minute). But much of the film is very bland, with talking head after talking head trying (unsuccessfully) very hard to make court reporting and stenography sound thrilling, to the point that the doc almost started to feel like a parody. While a sequence during which court reporters explain the emotional side effects of having to transcribe the details of brutal crimes or horrific incidents provides a few minutes of revelatory storytelling (how many of us would ever think of stenographers when discussing PTSD, for example?), one subject’s dramatic assertion that, without captioning, the hearing-impaired would have had no idea what was happening on 9/11 seems a smidge hyperbolic. Would the deaf not be able to, say, read a newspaper? Go online? Have a friend or family member who’d fill them in? 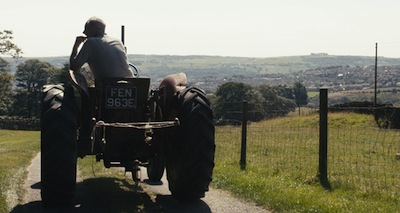 While On the Record is the latest entry in the “unusual competition” doc genre, it lacks the spark and creativity of other similarly themed films (see: Wordplay, The King of Kong or Spellbound). Tone-wise, though, the somewhat sedate film was in line with the contemplative nature of my next screening and the short which preceded it.

First up was the short film The Last Smallholder (6/8), director Francis Lee’s poetic ode to his father, the only remaining farmer still working the land in a once-thriving corner of Yorkshire. Quiet, meditative and beautifully shot, the film is a poignant metaphor for the gradual decline in agriculture worldwide, and the love that farmers nonetheless have for their unique, challenging and fulfilling way of life. 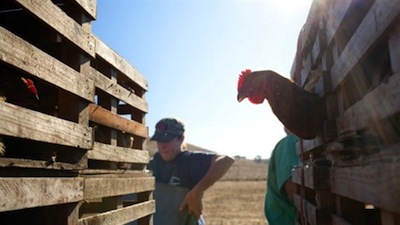 Its accompanying feature, On Her Own (6/8), is thematically very similar, but set in a rural California farming community, where one woman and her family struggle to keep their generations-old farm up and running in the face of financial hardship and loss. Shot over the course of roughly five years, the film revolves around Nancy Prebilich, who’s spirited, determined and unrelentingly committed – and trying to keep the family’s agriculture business afloat. But life continues to throw obstacles in her path, from the deaths of her parents to friction with her sister, escalating debt and much more, making the journey a decidedly rocky one.

Director Morgan Schmidt-Feng kind of lucks out with Nancy, who’s an engaging, sympathetic figure, and whose family’s story brings to light those of thousands of farmers facing similar difficulties all through North America. The film definitely isn’t a feel-good movie, though, and one of my film-going pals turned to me as the credits rolled and said, “Well, that was depressing.” But it’s a telling observation nonetheless, and possesses a subtle but powerful message: even if life seems hard, keep pushing through and, eventually, you’ll get to the other (better) side. 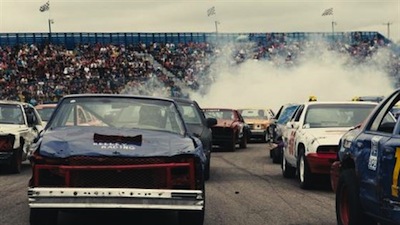 After the screening, I did something I’ve never done before: I darted into a screening after its scheduled start time… which was actually the result of an error on my part. The movie started at 6:15pm, but for some reason I thought it was going to start at 6:30 and, thus, walked in at 6:23pm to find programmer Lynne Fernie onstage doing introductions. Wait. What? I checked my watch, then my ticket. Oops. Thankfully, the Lightbox 1 is massive, and the entire balcony was virtually empty, so I scored a great seat and settled in for a pair of films that were the tonal polar opposites of what I’d seen earlier in the day.

I have to be honest and say that the short film Hell Runs on Gasoline! (4/8) REALLY SHOULD BE REVIEWED IN ALL-CAPS BECAUSE HOLY CRAP WAS IT EVER LOUD AND CHAOTIC. Essentially just nine minutes of on-track mayhem at the St-Félicien Autodrome, the doc features crazy cars, drivers and endless crashes over the course of a day’s races. Enthusiasts will no doubt dig it, but it didn’t really rev my engine much. 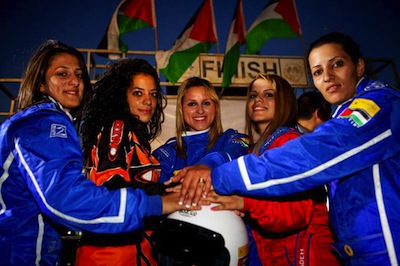 Fittingly, it was paired with Speed Sisters (6/8), a high-energy, high-octane look at the members of Palestine’s all-women car-racing team (and, as the film notes, the first all-women team in the Arab world). Noor, Marah, Betty and Mona (along with team manager Maysoon) love cars and LURRRRRRRVE driving them reallyreallyfast, and the lively, fun film from director Amber Fares tracks their ups and downs over a number of races. Vastly different (Betty is a girly girl, Noor is a wealthy tomboy, Marah lives in a refugee community, and Mona is… well, not featured very prominently) but united in the passion for racing, the women crush courses and stereotypes – they’re as driven as the men and as cheered as the men, in competitions that take place against the backdrop of military conflict. I kind of wished there was a little less race footage (after a while, it becomes repetitive, and there are only so many times “drifting” makes for cool shots) and greater exploration of the women’s lives off the track. Overall, though, it was a very entertaining look at a quintet of trailblazers.