Maybe it was the rain and grey skies, maybe it was the fact that it was a Sunday, but, man – it was like everyone forgot how to behave/work at Hot Docs yesterday. Every screening I attended started late, smartphones repeatedly popped on during films, the new ticket-scanning process s-l-o-w-e-d entry down everywhere… to the point that, at my final film of the day, they only began the process about 18 minutes before the slated start time, so people were still being scanned in 10 minutes AFTER the scheduled start time of the screening. It takes anywhere from five to 15 seconds to scan a ticket, which means it would take roughly 25 to 75 minutes to scan an audience of 300 people. How is this efficient?

When I asked a volunteer why they hadn’t started scanning tickets earlier, especially since the theatre itself was empty and we’d all been standing in line for at least a half hour before they decided to start scanning, she just shrugged. When I suggested that maybe, to make things easier and faster, they just scan ticketholders as soon as they *join* the ticketholders line (so that everyone in the line is scanned the moment they arrive), she said, “I’m just a volunteer.” Had the screening started on time, and had I not had to bolt afterward to sprint to the subway and attempt to catch my bus, I would have looked for the house manager to suggest it to him/her, as well.

And, as an aside, will there ever be Hot Docs or TIFF during which one or both of the escalators at the Scotiabank are not broken? Every. Single. Year!

But back to the films… I almost walked out of my first screening of the day, partly because I wasn’t loving the film and partly because there were so many interruptions and distractions that I kept losing my engagement with what was happening onscreen. Latecomers were being admitted almost a half-hour into the screening, smartphones repeatedly lit up… including one belonging to one of the directors (?!) and another one across the aisle from me, right in front of a volunteer (who did nothing), so I got up, crossed the aisle and asked the offender to please turn it off myself. But I’m glad I stayed, because Check It (5/8) turned around towards the last third. 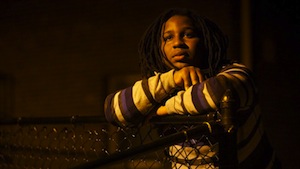 The film profiles assorted members of The Check It, a Washington D.C. gang made of LGBTQ youth. Outspoken, brash, fierce and ready to throw down at a moment’s notice, the gang members (who number in the hundreds) protect themselves and each other from bigotry and assault… but the first hour or so of the film started to feel like non-stop footage of obnoxious teenagers being obnoxious, while a number of well-meaning and infinitely patient adults try to steer them down better paths. The teens scream at each other, at authority figures, at their foes, at police, and they swarm a convenience store and rob it (on camera!). I started to wonder what the point of the film was (“sure, the gang is an interesting construct, but if there’s no redemption or positive outcome, isn’t this just another group of violent teenagers?”). Thankfully, the film was saved (for me) by its final act, when a couple of Check It’s members get an amazing opportunity, and the light of possibility is lit within them. 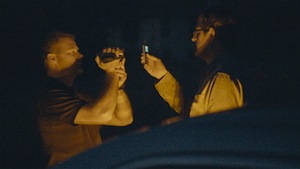 Next up was a film that was added to the Hot Docs lineup very late but was nonetheless a hot ticket: Louis Theroux’s My Scientology Movie (4/8), which sounded promising but wound up playing like an extended gag dragged out far too long. The purpose of the film is never quite clear – Theroux and director John Dower say they’re making a film about the notorious organization, but what follows is a series of vignettes of Theroux trying to get a rise out of Church officials, interviews with folks we’ve seen before (including former Scientologists Marty Rathbun and Jeff Hawkins), and a bizarre ongoing bit in which Theroux wants to use actors to recreate pivotal moments in the Church’s history. While there are certainly a few laugh-out-loud moments, there isn’t much meat on the bones of this doc. It’s lighthearted and a bit scattered, and Theroux’s seeming ambivalence to the very real threat the Church poses to its critics seems either very courageous or very naïve. And I worried about the potential danger to which he was exposing the actors (playing Church members in the reenactments) in the film – Scientology isn’t really known for its tolerance or sense of humor. 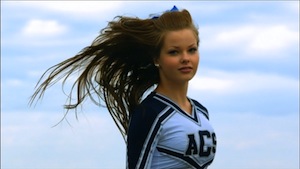 When I left the screening, part of me felt like heading home. I was tired, I suspected my final doc would (like the rest) probably start late, and did I really feel like watching a movie about Finnish cheerleaders? Despite that little voice urging me to head out, I stayed and lined back up again for Cheer Up (5/8), a doc purportedly about Finland’s worst cheerleading squad but which, instead, is a film profiling its coach and two key members of the team. There’s actually precious little cheering in Cheer Up, but a lot of introspection from its trio of subjects – each of whom is dealing with personal struggles of some sort – so, if you’re looking for a non-fiction version of Bring It On, you won’t find it here. While the girls are interesting enough and the cinematography stunning, the doc felt a little inert given its subject matter. The coach’s trip to Texas, for example, accounts for only a few minutes of screen time, and what she learns there is never really implemented (in a clear way for the audience, anyway) back at home. For me, the film would have been stronger if its focus had been narrowed a bit: either a film solely about the coach, or solely about the two girls, or solely about the squad’s collective quest for victory. By the time the credits rolled – on the film and my day – I was eager to get home and get to sleep.