Could it be that years of pleading that the balcony in Lightbox 1 be open by default during festival screenings has finally paid off? Because yesterday (and, apparently, on other days as well, based on some comments I’d heard from others) it was open from the get-go for my lone screening there! It was heavenly being able to head upstairs right away and settle in with snacks, instead of having to wait for the main floor to fill up first. And it was smart of them to open it early as every single balcony seat wound up occupied by the time the film started. Anyway, back to the docs…

My first film of the day was In My Blood It Runs (5/8), which follows a 10-year-old Aboriginal boy in Australia named Dujuan for a couple of years. A charming but mischievous kid – who’s frequently at odds with the teachers and principals at his school (as well as his grandmother) for his rebellious and delinquent behavior – Dujuan has also been identified as a “healer” by his Aboriginal community. 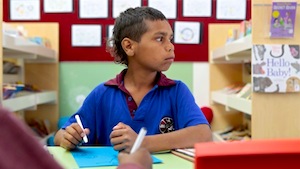 His family, like so many in their rural neighborhood, is doing their best to get by amid the country’s systemic poor treatment of Aboriginals, which dates back centuries. The slice-of-life film is directed by Maya Newell, who also helmed 2015’s Gayby Baby, and this documentary suffers from some of the same issues that film did, IMO: namely, it seems to inadvertently perpetuate some of the stereotypes it’s intending to dispel. The underlying issue, we’re told, is that Aboriginal kids are disproportionately sent to juvenile-detention centers – so why, then, profile a boy whose behavior seems to indicate that that’s where he, too, will end up? I *think* the argument the film is perhaps aiming to make is that Aboriginal communities are being oppressed by the predominantly white establishment, and should be able to govern themselves using their own rules and policies and the like, but I’m not entirely sure. My knowledge of the social and political landscape in Australia is admittedly limited, which is perhaps why more overt explanation of how Dujuan’s story represents an example of injustice might have been helpful for viewers like me. 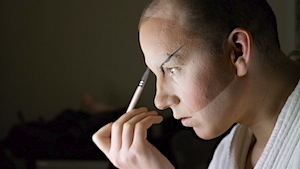 The film gets up close and personal with Trixie’s non-drag alter ego, Brian Firkus, who’s far more demure and introverted than his outrageous onstage persona, and who’s as floored by the impact of his work (at one point, he reads through some of his heart-wrenching fan mail) as he is seemingly ready to pack it in to become a full-time songwriter. There’s also the back story behind Trixie’s split with onscreen collaborator Katya Zamolodchikova (aka: Brian McCook), which reveals a high-drama friendship nearly destroyed by addiction and mental-health issues. While the film is insightful and provides a lot of fun backstage footage of Drag Race and/or Trixie that fans will no doubt enjoy, anyone (like me) without any prior knowledge of the show or its stars may be less likely to connect with the material in a meaningful way. There was a lot of stuff in the film that – based on audience reaction – will delight those in the know, but were completely lost on me, so a bit more context might have been helpful to deliver a well-rounded portrait with wider appeal.

My final film of the day was one I’d been looking forward to seeing since it was announced and, happily, it did not disappoint. Director Rachel Lears’ inspirational and energizing Knock Down the House (7/8) trains its lens on the 2018 midterm elections in the U.S., and four “disruptor” Democratic candidates stepping into the political arena for the first time to take on established incumbents in their respective districts. 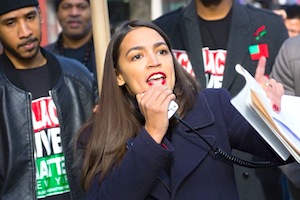 The quartet is made up of Cori Bush (Missouri), Amy Vilela (Nevada), Paula Jean Swearingen (West Virginia) and documentary-gold, lightning-in-a-bottle subject Alexandria Ocasio-Cortez (New York), whose journey makes up about 70% of the film (and could easily have been a standalone film on its own). Tracking these everyday women – none of whom had any prior political experience – and their campaigns from the very get-go, when they’re first approached to run by grassroots organizations (such as Justice Democrats and Brand New Congress), through to their respective primaries, Lears crafts a compelling underdog story, revealing some of the machinations and tactics these candidates are forced to combat. Fascinating and revealing despite the fact that, by now, the results of the assorted elections are public knowledge, Knock builds to a fabulous crescendo that nonetheless feels electric. Lears lucked out with AOC, who’ll no doubt be the big draw for audiences, but all four candidates demonstrate the determination, resolve and grit required to change the political landscape for the better.