I continue to be dismayed by the number of festgoers who still, despite all the pre-film requests, feel compelled to repeatedly check their email, text, surf the internet or just otherwise be discourteous, distracting dimwits during screenings. Yesterday, every single one of my films featured someone sitting within a seat or two of me, happily using their smartphone in the middle of a film. And, of course, my whispered “would you mind turning off your phone, please?” was met with indignation, a cold stare or, at least in once case, a quick “sorry!” followed by the device being turned off for the remainder of the film. In another instance, I got the death glare and that person kept right on browsing their messages over and over again. I just gave up.

Ironically, the most annoying smartphone offender was a woman wearing a lot of makeup, and she probably would have been wise to pay closer to attention to the film we were both supposed to be watching. Toxic Beauty (4/8) examines the dark underbelly of the multi-billion-dollar cosmetics industry: 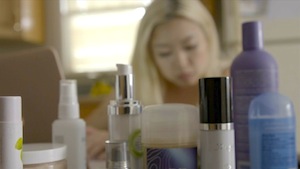 namely, the assorted endocrine-disrupting and carcinogenic and generally unhealthy chemicals packed into every single bath, body and beauty product known to humankind. Shampoo, soap, lipstick, lotion, deodorant… the whole shebang. Director Phyllis Ellis speaks to doctors, former beauty insiders, attorneys, and a number of women involved in class-action talc-related lawsuits against Johnson & Johnson to present a damning but not especially revelatory portrait of the industry and its shady practices (for example, labeling products “paraben-free” to appear “cleaner,” only to swap in an equally harmful chemical – disguised in a multisyllabic ingredient-label name in its place). But for all the dire news and details, I found the film lacking a key component: actionable information for viewers. The doc is basically saying that all mass-produced bath, body and beauty products are laden with ingredients that pose potential harm to their users… so what do we do? Are we just all doomed? Is there some way to turn this around? Are there groups or organizations working to change anything? If even some “natural” products pose risks, how does someone figure out whether a given product is OK to use? Are some products worse than others? Is it an all-or-nothing endeavor, so that you have to scrap every single product in order to be “safe”? Is there anything consumers can do on a daily basis to offset the effects of these chemicals via, say, diet? So many questions, and while the film sounds an important (yet not unfamiliar) alarm, it risks being dismissed as alarmist without also providing some kind of guidance or tiny shred of hope for audiences. 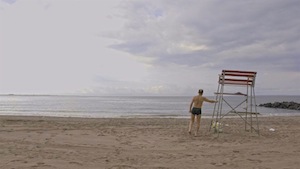 Next up was a film that was not at all what I was expecting, but I totally loved it. Director Brett Story’s The Hottest August (7/8) is less of a traditional documentary and much more like a cinematic piece of art, unfolding as if you were looking through a photo album of your summer vacation. Made up of dozens of very brief interviews with assorted residents of New York’s five boroughs, collected over the course of August 2017, the film is a sort of hypnotic examination of the present and the future – slow, melodic and absolutely beautiful to look at. Every single shot is meticulously composed and framed, often bathed in kind of a hazy, faded light, so that each tableau is like its own little gallery-worthy vintage photograph. Story’s subjects range in age, sex, ethnicity and class, each providing a tiny glimpse into his or her life, punctuated by clever audio effects. The film’s languid-summertime pacing is perfect, allowing its stunning visuals and its subjects’ commentary (which ranges from insightful to uninformed to profound) to sink in slowly. I’m not sure how or why, but the doc also made me feel super-relaxed. As I say, this isn’t your standard-issue documentary, but I’d also be wary of calling it “experimental.” It’s just a really quiet, lovely meditation. 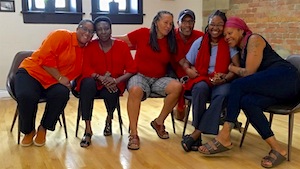 After waffling back and forth between options for my last film of the day (there are always so many great films competing for my attention ;-)), and debating heading home because I was feeling a little tired, I opted for Our Dance of Revolution (N/R), which chronicles the past 40 years of Toronto’s black queer community, its activism and its pioneers. Director Philip Pike speaks with a wide variety of notable trailblazing figures and pinpoints pivotal moments in the city’s LGBT history as it pertains to the work and efforts of gay and lesbian people of color. Informative and eye-opening, the film was about an hour in when I started to get a pounding headache – which had nothing to do with the documentary but, I suspect, everything to do with fatigue and not having had enough water throughout the day. Knowing that the headache would just get worse, I unfortunately decided to forego the last 35 or so minutes to make my way home a bit early and therefore missed the ending. As such, I’m not giving the film a rating, but I did enjoy what I saw of it.