The festival officially gets underway tomorrow, and these are the last of my pre-fest reviews. Coverage of my day-to-day misadventures begins on Friday. Until then, rest up, fuel up and get ready for 10 days of wall-to-wall docs! 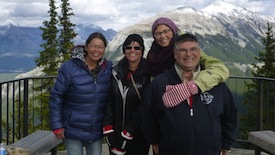 This somewhat uneven film follows four siblings – victims of the “Sixties Scoop” in Saskatchewan, which saw Indigenous children taken from their families by the government and placed in non-Indigenous homes – as they come together for the first time since they were kids. While there are some wonderful and wonderfully moving moments in the doc as Betty Ann, Rosalie, Ben and Esther forge a family, for me the film would have benefitted from more family reflections and less touring the sites in and around Banff National Park. As well, it was never clear exactly how or when they all connected – at first, it seemed as though they found each other as adults, but it’s gradually revealed that two of the sisters knew each other as teens, one found their mother years ago, and so on. The fact that they’re now together is great, but how they all found each other felt like an important-but-missing segment. 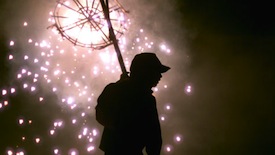 Visually stunning, and featuring a wide array of dazzling, slo-mo GoPro shots of fireworks going off – this slice-of-a-little-known-life documentary shines a spotlight on the town of Tultepec, Mexico, where the majority of residents are employed by the fireworks-manufacturing industry and where, every year, they gather for a massive fireworks festival. Narratively, the doc is straightforward and perhaps a little thin (more on the history would have been cool), and the residents’ collective story is told through the eyes of a local boy who very reluctantly works alongside his father, packing explosives while expressing his desire *not* to follow in his dad’s footsteps. It’s nonetheless a solid meditation on fire and spectacle, and the lengths people will go to in order to preserve tradition (despite the inherent danger). Not to mention, the film is undeniably pretty to look at. 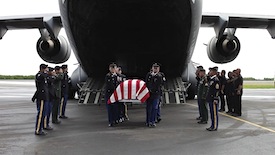 There are probably four different documentaries happening in Island Soldier, which is sort of a shame because the diluted narrative winds up not really serving any of them very well. Is it a film about the residents of Kosrae, Micronesia, who dutifully serve in the U.S. military even though they’re not U.S. citizens? Is it about Sapuro “Sapp” Nena, a beloved Kosraean soldier whose funeral opens the movie? Is it about the future of Micronesia come 2023, when its status as a U.S. protectorate ends? Or is it about the U.S. military’s willingness to accept these foreign soldiers without providing any support or aid to them or their families once their tours of duty are complete? It’s sort of about all of those things – and honing in on any one of them alone would have perhaps made for a more cohesive film – but none are really explored properly. The result, which still manages to be moving, winds up just skimming the surface of what is surely a complex situation for all involved. 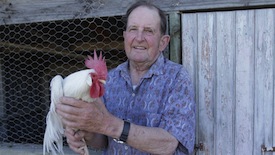 This was a must-see for me the moment I watched the trailer – quirky Kiwis with a quirky hobby that involves fancy chickens competing in a pageant?! I’m in! – but I found myself a little disappointed with the resulting doc. Don’t get me wrong: it was good, just not as colorful and amazing as I expected it to be given its subject matter. Directed by Slavko Martinov, the film tracks the embattled members of the Christchurch Poultry, Bantam and Pigeon Club as they jockey for leadership of their organization and groom their respective feathered friends for the upcoming National Show. Bird puns, bird facts and bird lovers abound, but what should be the thrilling climax – the aforementioned exhibition, and the prestige and excitement that go along with it – just kind of… fizzles. It’s certainly a fun film, and one of the bona fide light-hearted docs at this year’s fest, so maybe book it as a palate cleanser between some of your heavier films.