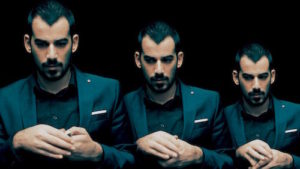 I have no clue how to play bridge, but that didn’t detract from my enjoyment of Dirty Tricks (6/8), a delicious card-table thriller about Lotan Fisher, the one-time bridge-playing child prodigy and world champion, whose golden-boy status was forever tarnished when he was accused of cheating. And, right from the opening frames, it’s obvious the story is going to be a wild ride. Directed by Daniel Sivan in a slick, stylized way befitting a Hollywood heist caper, the film tracks Fisher’s rise through the bridge ranks, propelled by his eidetic memory and ability to recall, well, anything and everything with little to no effort. The veritable “Michael Jordan of bridge,” Fisher and his bridge partner, Ron Schwartz, win tournament after tournament after tournament, knocking out opponents and savoring a lavish lifestyle typical of a Vegas high roller. But when Boye Brogeland, a Norwegian bridge champion and one-time teammate of Fisher’s, loses the prestigious 2015 Spingold Championship to Fisher on appeal, he suspects — and subsequently makes very public accusations — that Fisher cheated (curiously, both almost equal-weighted mortal sins in the bridge world), and all hell promptly breaks loose. Soon, it’s every champion for himself as investigations are launched, long-held grudges are exposed, and Fisher struggles to clear his name (and explain his own skill) before he’s forever banned from playing the game he loves. Filled with commentary from bridge luminaries, including superfan Isaac Mizrahi!, Dirty Tricks is an exciting, popcorn-worthy look at one of the strangest and most serious scandals to strike a global competitive community. (Bonus: it’s bound to stir up interest in one of the most difficult strategic card games out there!)