Whether it’s making meaningful connections, adapting to new situations or leaving a legacy for those to come, these three films explore different facets of the human experience, with varying success. 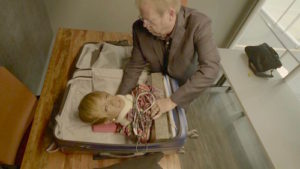 Last night, one of my editors emailed me a marketing document that had been written entirely by AI. “No human hands have touched this copy!” he wrote. I read the release and it was… actually good. As someone who makes her living writing and editing, a teeny chill went down my spine. Little did I know how relevant that email would be today when I sat down to watch director Ann Shin’s fascinating and thought-provoking look at the “transhumanist” movement, and the evolution of artificial intelligence as a way of “downloading” one’s memories into a machine to facilitate an eternal existence. In short: it scared the bejesus out of me. Overflowing with eye-opening information and showcasing the ground-breaking (and, frankly, alarming) AI-related innovations happening around the world — from a U.S. lab growing brain cells (!) to a Japanese AI corporation that is right out of HBO’s Westworld (complete with a creepy and very realistic child android) — the doc poses all sorts of make-you-go-hmmm questions: can technology really replicate human cognition? Is information the same as a soul? And is a simulation of yourself, no matter how lifelike, truly achieving “immortality”? Amid the optimistic scientists and researchers and a virtual Deepak Chopra (seriously), who all sound like they strolled in from every cautionary sci-fi movie ever made about seemingly beneficial technology that subsequently wipes out the human race, Shin grounds her film in a very human experience: witnessing her elderly father struggle with dementia and declining cognitive ability, and wondering what it would have been like if she’d been able to capture some of his memories before they evaporated. Hugely engrossing, totally unsettling and unexpectedly moving, the film is a worthy (albeit late!) addition to my list of Hot Docs 2021 conversation-starters. 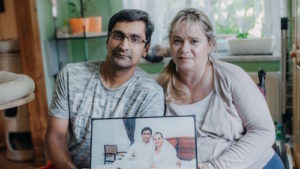 Not every film screening at Hot Docs has to tackle a Hot Topic or a Big Issue to make for satisfying viewing, as is proven by this understated little film. Directed by Katerina Hager, shot over two years and bookended by two Christmases (2017 and 2019), the doc tracks the years-long effort of a married couple — Zdenka, who lives in the Czech Republic, and her husband Tabish, who lives in Pakistan — as they attempt to keep hope (and love) alive through Skype, presents in the mail and the rare rendezvous in Sri Lanka, while they repeatedly attempt to secure Tabish legal entry into the Czech Republic. But the Ministry of Foreign affairs denies his visa applications time and again, believing the marriage to be a sham. And you can sort of see why the relationship might raise red flags: the duo met on Facebook playing Farmville, got engaged during a Skype call and got married the first time they met in person. As Zdenka and Tabish navigate the assorted trials of their marriage, including disapproving parents on both sides and a language barrier they bridge through mutual broken English, I kept wondering what the “twist” would be. Reality TV and other films of this ilk had primed me to expect the worst. Would the government turn out to be correct in its assessment of Tabish? Would one or both parties eventually just throw in the towel? And, if they did manage to snag a visa, would their dreams of married life together be shattered by some kind of harsh reality? Spoiler alert: this is a gentle meditation on what a relationship looks like in the age of long-distance romance, and is less about shocking revelations than it is about finding and making true connections online. 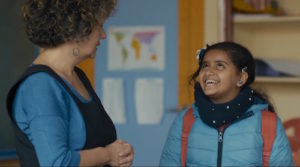 Sometimes, when you watch a documentary that really isn’t working for you, you catch glimmers of what could have been a much better film. That’s what unfolded as I struggled to sit through this “satirical” look at the immigrant experience in Seville, Spain. Directed by Juan Antonio Moreno Amador, the film was shot over roughly 18 months and introduces viewers to an array of newly arrived asylum seekers, all participants in an integration program being run out of a former brothel. Amador’s cameras follow them as they try to navigate their new lives but, save for a few sequences — among them, a massive Easter procession (that could look to a newcomer like a KKK march) being witnessed by a Black refugee from Mali, and a polling-station confrontation between a Venezuelan newcomer and an anti-immigrant voter — most of what happens onscreen feels disconnected, like a thrown-together collection of random vignettes and moments. There isn’t a cohesive narrative: assorted participants randomly drop out of the film as it progresses, and some are in the film so briefly I wondered why they were included at all; storylines are introduced only to be totally abandoned; and then, inexplicably, the director inserts himself into the film (without introduction) about 70 minutes in. At first, I thought he was a potential employer conducting a job interview with one of the film’s subjects, but no! Add to all this a very confusing timeline: throughout, it appeared as though the film was shot in 2016, but an unnecessary COVID-related coda at the end sort of implies the pandemic broke out just as filming concluded. Given the 18-month shoot that’s repeatedly referenced, that math doesn’t add up (i.e., 2016 and 2020 are four years, not 18 months, apart). As I watched the doc, I kept thinking that Amador spread himself and his film too thin — rather than following SO many different subjects, he (and his film) might have been better served by narrowing the scope and giving fewer people more effective focus.