In the Shadow of the Moon

In the Shadow of the Moon is one of the finest documentaries of the Apollo space program I’ve seen. Being very picky about how many pie slices I allow, I’ll have to give this one the full pie hot out of the oven.
By Tomon March 16, 2014
0 Comments
Our Rating 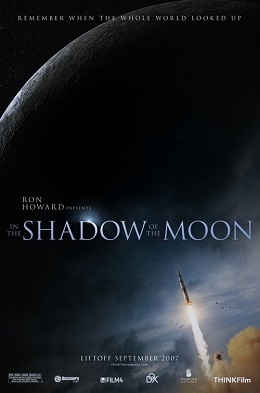 Back in 1969 when the first moon landing happened, I did watch it. I was just over a year old, but I proudly like to say that I was there! When I was a little guy, Mom says that one of my first sentences spoken was: “See the moon!” Ever since those words, I’ve been a huge enthusiast of the Apollo program.

I’ve seen just about every documentary on the topic—several times—and own many on DVD. I wasn’t sure what to expect from In the Shadow of the Moon, and kind of figured it would be more of the same just repeated again, with the same video footage that we all know and love.

Not the case this time. Just in the first few minutes, I knew this was something different and special and found myself totally absorbed for the full 100 minutes.

The movie starts out with a very rare interview with the seldom seen Mike Collins and several other astronauts including Alan Bean, David Scott, Edgar Mitchell, Harrison Schmitt, Jim Lovell, John Young, Charlie Duke, Gene Cernan, and Buzz Aldrin. As expected, nothing from the elusive Neil Armstrong, but hearing the other astronauts’ stories about Armstrong was nearly as good as an interview with the man himself. Mike Collins and Alan Bean stole the show with their humor and wonderful recollections of the flights to the moon. Buzz Aldrin even mentioned that he did a “first” on the moon that was previously unknown until now. When the astronauts were first introduced on the screen, it would split and show them now and then. Yeah, it was a long time ago, these guys are getting old, but the adventures are still very fresh in their minds.

As for the footage, most of the video is never before seen. The filmmakers had access to the archives in Houston and went through over 500 hours of footage—much of it never seen since the last Apollo missions in the early 1970s. The footage looked great, despite a few smudges and scratches here and there. It nearly looked high-definition on the big screen. Here I thought I had seen the Saturn V launches from all angles… I sure was mistaken! The descriptions of experience of a launch by the astronauts was fascinating, as well as somewhat terrifying, when they describe how it felt to have 7.5 million pounds of thrust under your butt. I think the scene that really got me excited was showing one of the later launches of the spacecraft off the lunar surface. Sure, this was something I had seen before, but we never saw foil, debris, and “Old Glory” being ripped loose and blown way across the surface. I figure the scene showing the flag tossed may have been edited out and never shown for obvious reasons!

Unlike Al Reinert’s excellent 1989 documentary For All Mankind, which uses clips of actual missions all tied into one fictitious story, Shadow starts mostly with Apollo 11, then moves into the other missions, and ends up with the landings. Nothing is lost in this and the film covers the Apollo flights very well.

During the closing credits, there are comments from the astronauts that were basically a smack in the face for those annoying “moon hoaxers” who think this was all faked. “If it was faked, how would thousands of people who worked on the space program have kept it a secret?” was one of the comments.

In the Shadow of the Moon is one of the finest documentaries of the Apollo space program I’ve seen. Being very picky about how many pie slices I allow myself, I’ll have to give this one the full pie hot out of the oven. Don’t even keep your fork or get a plate, since this documentary won’t be sharing slices with anyone!