Like Titanic or Apollo 13 we know how the story ends, but I still found this an extremely tense movie to watch…
By Tomon October 27, 2013
0 Comments
Our Rating 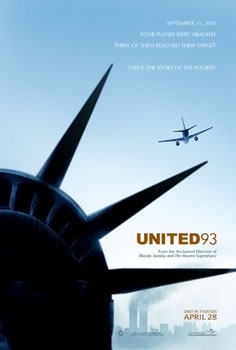 At first thought, I was expecting a totally tasteless disaster movie based on Flight 93 that was hijacked on 9/11/2001 and crashed (or shot down?) in a Pennsylvania field.

Unless you were living in the bushes or lost on Gilligan’s Island, you already know the story of United 93. The movie was based on all the facts collected from phone calls, air traffic controllers, and flight recorders in an attempt to re-create what happened on that day. Like Titanic or Apollo 13 we know how the story ends, but I still found this an extremely tense movie to watch, knowing that the events may have unfolded in the plane very much as depicted. It isn’t a movie you’ll sleep through, but find yourself clutching the seat for the whole two hours, finally letting go after the credits have rolled and the menu screen shows up again. “Whew!” you say after all that—definitely one of those movies you will go to bed and think about after watching it.

The characters in the movie are based on real people, and the filmmakers and actors did visit the families of the passengers in order to get their personalities correct. Despite this, we really don’t get to know the characters all that well anyway, but it doesn’t really matter.

Of course I can’t review an airplane movie without comments on the special effects. This one was one of the most realistic movies with all the proper air traffic control communications, the procedures looked accurate, and the cockpit was realistic looking enough to be frightening (especially the final scene of the movie). Most movies tend to use the generic cockpit that appears to be the size of a studio apartment and they hang a clipboard on the back wall for effect. United 93 must have been filmed in a 757 simulator.

Only five years since the event and the images of the planes hitting the towers are permanently burned into our minds, I think the movie may have been made a little early. Otherwise the movie was well-made, and Hollywood didn’t seem to overpower the story and make any single person the hero, which is the common thing to do. All the passengers on this flight were heroes as they tried to subdue the hijackers.

As scary as the movie was, it was well done and I’d recommend it… but not the night before a trip on a plane.