It may not sound like a beautiful film, but it truly is. 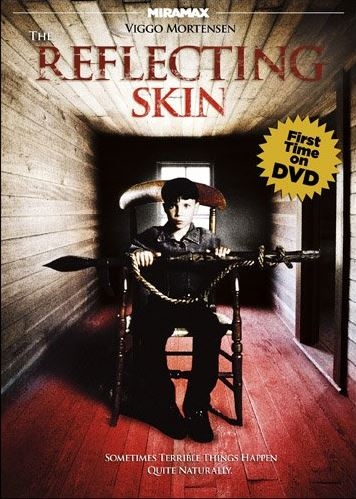 The Reflecting Skin is one of the most peculiar, striking films I have ever seen, and a week after watching it, I still can’t shake the story of little Seth Dove or find words to describe it. Everybody and their brother (i.e. the three other people who saw this movie) compared it to a David Lynch film, but that’s not really fair. David Lynch films are usually gratuitously unsettling and rarely make proper sense. The Reflecting Skin defies comparison, and though it is rather bizarre, it’s not without reason.

Seth (Jeremy Cooper) lives in a run-down nowhere town with his detached mother and shell of a father who reads vampire novels all day. They run a gas station out of their yard, but the only customers are a bunch of spooky Greasers in a hot rod. Seth’s interaction with his parents is limited to weird battles involving water, and with this kind of home life, it’s no wonder he spends most of his time alone or with his little friends. Their favorite activity is tormenting Dolphin Blue, the local eccentric played by Lindsay Duncan.

When Seth finds the body of one of his friends floating in the well, Mr. Dove becomes the primary suspect. Apparently there was an incident that hinted he may be a homosexual or a pedophile. “I won’t go through it again!” screams Mrs. Dove, and before you know it, Seth’s father is dousing himself in gasoline and lighting up the sky. After that, the only thing Seth (and the audience) has to look forward to is the return of his brother Cameron, played by Viggo Mortensen. He brings an element of stability to the household, but has too many of his own problems to bear the responsibility of Seth. Imagine returning from dropping atomic bombs in the Pacific to a desolate hometown whose residents keep accusing your dead father of wandering the streets, “drippin’ gasoline and killin’ children”.

Sheriff Ticker (Robert Koon) refuses to let the matter drop. He pulls Seth aside and asks,

“Did your father ever touch you?”

Scenes like this bring an element of surreal humor to what could be a bleak and creepy film.

Inevitably, Seth starts going a little nutty when Cameron falls in love with Dolphin Blue. He’s convinced she’s a vampire, sucking the life out of him, because, alas, Cameron is not well. His gums are bleeding, he’s losing weight, and his hair is falling out. When Seth stashes an “angel” that smells like fish under his bed and starts visiting with it every night, it’s pretty clear that he’s going to need a lot of counseling one day.

The story builds to a shocking climax that leaves Cameron sobbing on the ground and Seth screaming into the sunset. It may not sound like a beautiful film, but it truly is. Not only is it visually stunning, but this strange story is carefully crafted to be funny, moving, and bewildering all at once. The Doves are victims of their own naiveté to the point where you just want to scoop them up and explain reality to them. They demonstrate what Dolphin Blue explains so eloquently: “Innocence can be hell.”