In no time, Independence Day: Resurgence establishes itself as yet another sequel that no one asked for.
By Lindaon November 12, 2016
0 Comments
Our Rating 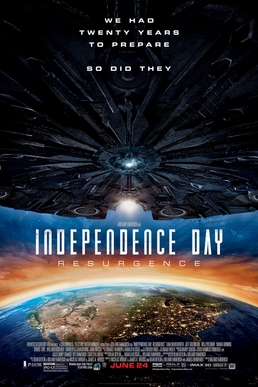 I’m not the only one who has realized that the best movies lately are not movies at all. Cable and independent television has created some of the best and most varied entertainment the last few years, while Hollywood struggles to figure out how to get literally the biggest bang for their bucks. Blockbuster wannabes seem to fit very specific molds: superheroes, remakes, and sequels. Perhaps it is sequel fatigue, but Independence Day: Resurgence, surfacing 20 years after the hugely popular and entertaining Independence Day, is one of those sequels that is too little too late. Why did they bother?

The trailer says it all: Twenty years ago, humanity won a war against the aliens, and miraculously won, conveniently on America’s Fourth of July (remember, all it takes is a computer virus!). In the meantime, surviving humans have used this time and knowledge of the technology left behind to prepare for another invasion. But the aliens have also had 20 years to prepare! Wah-wah. Theyyyyy’re back!

Because this is Hollywood, the leads are a generically charisma-free trio of fighter pilot youngsters, Liam Hemsworth, Jessie T. Usher (who plays the son of the Will Smith character from the original film), and token female Maika Monroe. Among those returning are Bill Pullman as the ex-President Whitmore, suffering from PTSD, the ageless Sela Ward as the new President, and Brent Spiner as Area 51 scientist Dr. Brackish Okun, who apparently has been in a coma this whole time (I’d say along with the rest of the characters).

The only people that seem to be having any fun are Jeff Goldblum and Judd Hirsch as bickering father and son. They end up hurtling across the desert in a yellow school bus full of screaming children, as they frantically outrace a giant alien chasing after them. They are the only ones who know what movie this SHOULD be. That is, it should be fun, which it’s not.

All of the many MANY roles are underwritten, and the game cast does what they can with it, which is not much. The alien ships are bigger and better, but are confusingly inconsistent in scale. It’s the same plot as before, but with no tension (because really, do you think we could lose?). The whole movie ends up being a head-scratching WHY? Not, why did the aliens come back to try to kill us again? But more like, why did they bother making this movie?

If you care to spend more time with this film, the Blu-ray features an hour of featurettes Another Day: The Making of Independence Day: Resurgence, plus the “news” recap The War of 1996, Fred Armisen hosting It’s Early ABQ, pluse deleted scenes, concept art, audio commentary by director Roland Emmerich, and the requisite gag reel. 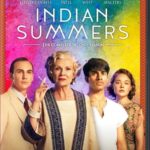