Just keep swimming, Dory. We are more than happy to stick by your side wherever your adventures take you.
By Lindaon December 9, 2016
0 Comments
Our Rating 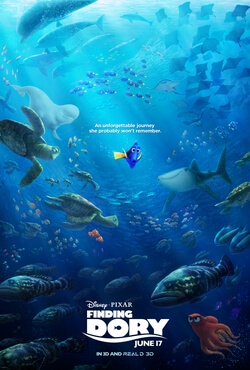 Back when I watched Finding Nemo for the first time, I was totally charmed by the film… but it was the blue tang that actually made me cry. Ellen DeGeneres was at a lull in her career right after she came out, and media flapped its fins awhile, unsure what to do with a girl next door who happened to be gay. Then Ellen surprised everyone by being the heart and soul of Pixar’s hit movie, with her sweet, forgetful fish stealing the show from the title character. Well, sequels are often perfunctory and unnecessary, but I don’t think anyone minds Dory being an exception.

Pixar has always been so good at squeezing your heart in milliseconds of magic. When we learn about Dory’s childhood (fry-hood?), it will hurt your soul to see little memory-challenged Dory–with her huge bulging huge eyes and gummy lips–lost, desperately asking for help to find her parents in the murky waters. Flash forward to the Nemo-has-been-found present. Adult Dory is happy with her new friends Marlin (Albert Brooks) and Nemo (Hayden Rolence) but she is sad for something she can’t quite remember. When she gets a flash of memory (her parents!), she immediately darts off in the hopes of piecing together the gaps of her own story, and hopefully find her family.

The adventure pretty much follows the tried-and-true formula that made the first film such a charming hit, but this time it’s Marlin and Nemo chasing Dory across the ocean to her home-waters, to some place called California. Without spoiling the unfolding story, there is a fabulous new main character, a stealthy octopus named Hank (Ed O’Neill), who somewhat reluctantly (and hilariously) helps Dory in her quest. Of course there are scene-stealing characters like a couple sluggy sea lions, a grown-up childhood shark-friend named Destiny (Kaitlin Olson), and a dim-bulb, voiceless bird named Becky who is at the bottom of the evolutionary totem pole, at least in comparison to all the other wily critters. And I have to give a special shout-out to Sigourney Weaver in one of the more inspired cameos I’ve seen in a long time. It’s all very funny, thrilling when it needs to be, and, unsurprisingly very sweet.

The thing about Pixar films is that, visually at least, they somehow manage to improve their animation with each film. The look of Finding Dory is astonishingly beautiful. Over the years, the studio has also created films of such quality of storytelling that they’ve forced their competitors (later partners like Disney) to up their game. And out of all their excellent films, Finding Nemo is probably my favorite Pixar film. Luckily, for a fan like me, Finding Dory doesn’t disappoint.

The tagline of the film is “An unforgettable journey she probably won’t remember.” But I’ll be one of many I’m sure that will remember Dory’s tale fondly for her.