When I first saw this movie, I found it to be a fresh take on the cop/mob drama genre, and was not surprised to see Hollywood take note. 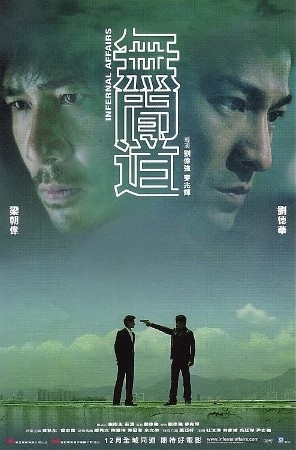 I first saw this film a few years ago at a film festival, enjoyed it, and was later appalled when I heard that Brad Pitt has optioned the rights for a US remake. Sheesh. Can’t Hollywood think of ANY original ideas anymore? The original Infernal Affairs was such a huge hit that it immediately spawned a prequel and a sequel within a year. So I decided to revisit the original, and check out II and III, right after seeing The Departed (a movie which, I admit, I enjoyed tremendously).

Tony Leung stars as Yan, a cop who is a mole in a Hong Kong triad (aka Mob) run by Sam (Eric Tsang), a charismatic and fierce gangster. Yan has been undercover for 10 years. He was symbolically kicked out of the police academy, only to be brought back in secretly by Inspector Wong (Anthony Wong) to go deep undercover.

Yan’s cinematic counterpart is Lau (Andy Lau), a police informer for Sam, who himself was hand-picked as a young man to specifically become a cop, while being deep in the back pocket of the triad. Lau is a cool character, with an impeccable police record, and sleek charm. He is, of course, nothing but trouble—giving Sam and company tips about police raids, thusly thwarting the cops’ efforts to take Sam down.

The two men circle each other for the length of the movie, both being instructed by their true bosses to expose the identity of other, of course leading to an inevitable and tense standoff.

Infernal Affairs takes some risky moves, shocking the audience with a couple of extremely memorable scenes involving characters that you’ve grown to care about. When I first saw the movie, I found it to be a fresh take on the cop/mob drama genre, and was not surprised to see Hollywood take note. (Recently I was even more surprised that Hollywood did such a good job adapting the story into The Departed.)

Tony Leung and Andy Lau both have charisma to burn. Leung is exhausted and disheveled-looking, but has the nervous energy of a cornered animal. Yan’s wish is to get his identity back, as a cop and as a regular citizen, but the way he’s played by weary Tony, you’re not sure if he even knows what that kind of life is anymore. Andy Lau, on the other hand, looks sharp in suits, with his fashionably coiffed hair, but also has this nervous edge that probably strikes his compatriots as ambition, but the audience knows better. The two actors are fantastic.

But after seeing Infernal Affairs several years ago, then watching The Departed, then re-watching IA now, I was struck how The Departed benefited by stretching the length of the story by 45 minutes or so from IA. The background of each character was buffed up, and there was a bit more elaboration, and in some cases motivation, to the already twisty plot. IA supposedly tackles this problem with its prequel and sequel (which might be a bit of overkill), but I have to admit I noticed how The Departed pulled the plot threads into a more cohesive stand-alone film.

That said, the films should be viewed as completely independent entities. After all, Infernal Affairs came first, is more visually stylish (with Christopher Doyle helping out with cinematography), and has the benefit of the sheer star power of Leung and Lau (two actors whom I generally enjoy a lot more than Matt Damon and Leo DiCaprio). Scorsese may have made and extremely enjoyable, totally American adaptation, but give credit where credit’s due… Infernal Affairs did it first.