The Departed is Scorcese’s most wildly entertaining movie in years.
By Lindaon October 27, 2013
0 Comments
Our Rating 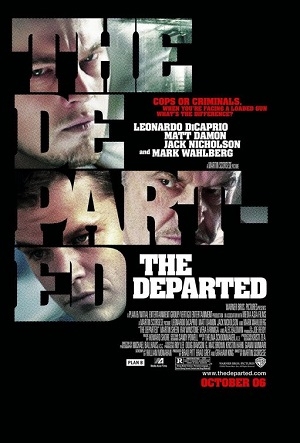 Shortly after seeing the original Hong Kong film Infernal Affairs a few years back, I heard that the rights had been optioned by Brad Pitt, of all people, for the seemingly unavoidable American remake. Was Hollywood really so dried up of ideas that they had to troll every already-good foreign film and translate it into English for dumbed down American audiences? I have to admit I rolled my eyes at the news, even when I heard all the hot-shot names eventually attached to the project: Scorsese. DiCaprio. Damon. Nicholson. Hmmm.

So imagine my surprise when I finally got around to seeing The Departed as part of my Oscar homework: It turns out that The Departed is Scorsese’s most wildly entertaining movie in years.

Scorsese, working from a screenplay adaptation by William Monahan, moves the action from Hong Kong’s mean streets to the grit of Boston. The story follows the path of two young men from different sides of the law, in a cat-and-mouse game (or should I say rat-and-rat game?). Matt Damon plays cocky bastard Colin Sullivan, whom we meet in opening-scene flashbacks as a kid in “Southie” Boston, a hood ruled by the Irish mob. He is noticed and groomed by a literally shadowy figure Frank Costello (Jack Nicholson, who avoids young-man makeup by being filmed in child’s-view silhouette). When Sullivan has grown into adulthood, he goes through the Police Academy, graduates, and becomes part of the Special Investigations Unit in Boston. The twist is that Sullivan is a mole for Costello, feeding the mobster insider information while leading the police team that is trying to take him down.

Meanwhile, another cadet peer of Sullivan’s from the Academy is secretly plucked from the new recruits by Captain Queenan (Martin Sheen) and his sidekick Sergeant Dignam (the hilariously foul-mouthed Mark Wahlberg). This scruffy and haunted fellow Billy Costigan (Leonardo DiCaprio) has the curse of coming from a mob-tied family, and despite his efforts to try to distance himself by joining the police force, ends up being the perfect candidate to go undercover in Costello’s mob. Costigan is the reluctant mole, but has the gritty credentials and family name to be trusted and brought in by Costello’s gang.

Such is the setup of The Departed. Both the police and Costello become aware that they each have a rat in their midst, but the identity of each man is so buried that those closest to them don’t even know their true selves. And of course, as this is a Hollywood adaptation, a female character is introduced—a psychiatrist (Vera Farmiga) who should know better—that becomes romantically involved with both the confident hot-shot Sullivan and the verge-of-unravelling Costigan. The characters circle and circle around, each getting close to finding out too much, leading to the inevitable, yet still shocking conclusion.

It seems to me that Scorsese has suddenly decided to have fun with filmmaking again. Maybe he just gave up after winning praise, then losing the Oscar (again) for The Aviator. There seems to be a sort of infectious glee behind the energy of The Departed, from the ludicrous and often hilariously crass script, to the testosterone-heavy male one-upmanship energy from the cast, who is clearly having a field day. Their Boston accents may be all over the place, but everyone from the leads to the great supporting cast including Wahlberg, Alec Baldwin, Ray Winstone, and all the assorted gangsters, are clearly loving it. The result is a surprisingly enjoyable (if a bit long) gangster movie that shines as popcorn entertainment, keeping you glued to the screen until the satisfying conclusion.