Boy, Al Pacino looks tired—as if the poor guy doesn’t already have bags under his eyes. By the end of Insomnia he is so bleary-eyed and staggering from a week of sleep-deprivation that you can’t help but squirm uncomfortably. Pacino easily does his best work in years in Christopher Nolan’s sublime thriller. 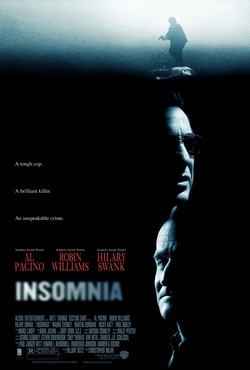 Pacino plays Will Dormer (the name a clever play on the French verb “to sleep”), a veteran cop from LA, who is called to a case in Alaska, the land of the midnight sun, as a favor to a friend in a small town police force. There’s been a murder of a teenage girl, unthinkable in a town where the most calls are for drunken behavior. With his partner (Martin Donovan) he makes a grand entrance to the local police headquarters, his reputation and big-city experience filling the room, and especially impressing wide-eyed and eager young cop Ellie Burr (Hilary Swank) who has worshipped his work from afar.

But Dormer’s seeming control and authority over the murder investigation slowly starts to unravel. It doesn’t take long for the dots to be connected to Walter Finch (Robin Williams), a reclusive mystery author, as the murderer, so the film’s suspense is less about catching the killer, but more about the contest of wills between Dormer and Finch.

Not a dim bulb, Finch has the goods on troubled Dormer. There has been a threat to Dormer’s career back in LA, as he’s threatened by an impending crackdown on corruption in the force. Not only that, but Dormer’s problems only continue in Alaska as the investigation immediately hits a very personal tragic bump in the road. Finch likes to think that he and Dormer are more alike than Dormer wants to admit, and as Dormer mentally deteriorates from insomnia from the 24-hour daylight, he himself is not so sure that Finch is wrong.

Director Christopher Nolan’s previous film Memento relied on a structural gimmick of scenes being played in reverse order. In Insomnia (a remake of a 1997 Norwegian film starring Stellan Skarsgård), his stamp is more subtle. Nolan effectively and gradually distorts the audience’s perceptions through the eyes of Dormer, through (literal) fog, erratic depth-of-focus, and disorienting points of view. But the effect is gradual, slowly breaking us down, making us doubt, like Dormer, what we have seen.

Though the end of the film wraps up in a way that is really not too surprising, considering the somewhat typical direction of the plot, the journey there is still riveting thanks to Pacino’s performance. Robin Williams as the bad guy is fine, if a bit distracting (in my eyes, he will always be “Robin Williams,” as opposed to the characters he plays). But it is Pacino makes Insomnia rise above the typical cop film (which it easily could have been in lesser-skilled hands). I challenge you to NOT rub your eyes at the end of the film to clear your own head of this subtle thriller.