Downey completely owns the character of Tony Stark/Iron Man—and the film, for that matter.
By Lindaon May 1, 2013
0 Comments
Our Rating 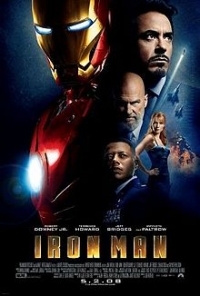 I give Robert Downey, Jr. full credit for being the reason that I found Iron Man to be enjoyable. What is essentially an origin story for the latest Marvel superhero to come to screen is totally given a unique spark by Downey’s inherent smirkiness that he brings to all his roles. I’m not sure what he does, but there is something affected in his acting style, like you sense that he’s not only rolling his eyes at his lines, but also is completely and utterly enjoying what he’s doing despite that. His wit and inherent intelligence is effortless, and he brings a surprisingly wide-eyed appreciation for what he gets to do in this film.

Downey plays Tony Stark, uber-rich weapons-manufacturing mogul and a technological boy-wonder of invention. With a cocktail in hand and a beautiful woman (or two) draped on his arm, he exudes a confidence and carelessness when stammering fans and reporters throw themselves his way. He’s called a super-patriot for creating weapons that are technological marvels, and unsurprisingly, the military is not only his number one fan, but his main customer.

So count him (rather naively) surprised when he finds his military escort ambushed in Afghanistan (after his on-site demonstration of his latest toy that blows shit up). His escorts are killed, and Tony wounded as he is taken captive by a multi-national terrorist group that hides in the hills. They want him to build them one of his latest missiles to add to their large collection of other shadily-obtained munitions emblazoned with the Stark Industries brand name. Hiding his shock that the bad guys have obtained weapons that his company built, Stark agrees to their request and is given supplies. But, instead of building a missile, he starts pounding away at iron plates, making a metal rocket-powered suit that will not only be the ticket to his escape, but the prototype of a super-hero costume to come.

Stark’s Iron Man is similar to Bruce Wayne’s Batman. They are two rich playboys-cum-super-heroes that are only given their super-power capabilities via their super-riches. They have the means to make themselves into super-strong fighters, but without their fancy costumes and toys, they are regular men. Well, Tony Stark does have one difference. As a result of the wounds from his capture, he has a glowing power-reactor-thingy installed in his chest that not only keeps him alive, but proves the key to power behind his super-human iron suit.

The first half of Iron Man works the best as we get to see Stark turn from a self-justified capitalist to a capitalist with a conscience. When he returns to civilization, he shocks the world and his business partner (Jeff Bridges) with his proclamation that Stark Industries will no longer manufacture weapons. In the meantime, he holes up in his Batcave… I mean his mansion, and perfects his Iron Man suit with the help of his trusty Girl Friday, Pepper Potts (Gwyneth Paltrow). There are many laugh-out-loud moments as he perfects the suit’s functionality, and there is also a warm playfulness as Downey interacts with his only co-stars for those scenes—that happen to be a speechless robot assistant and his computer’s voice.

But it is the second act of the film where Iron Man starts to show its weakness by becoming, well, typical. As a character is suddenly recognized as the true bad guy, there is the inevitable set-up for a showdown. And when the showdown happens, it comes across as a cross between a monster movie and battling ‘bots scene from Transformers. (And you all probably know that I hated Transformers.) When Downey is in his suit, the character becomes surprisingly less personable—from the outside, Iron Man has an eerily expressionless metal mask, save for badass glowing eyes. The only way we know it is Stark is from Iron Man’s altered voice that quips one-liners, and from awkward shots of Stark’s face reacting inside the mask. Hm.

But despite the action scenes kind of sucking the energy from the film, luckily they are only a small part of the big picture. Downey completely owns the character of Tony Stark/Iron Man—and the film, for that matter. And he is surrounded by a surprisingly top-notch supporting cast. Jeff Bridges is simmering and cranky, probably in no small part because of his ridiculous character name (Obadiah Stane!). Gwyneth brings sass, depth, and maturity to the token female role, which in anyone else hands’ would be completely forgettable. And Terrence Howard, normally soooo good in everything, is sadly the only talent that is wasted, as Stark’s military pal Jim Rhodes.

The movie rolls at a quick pace, and there is no time to get bored or restless. And just when you wonder if the film is setting up for a sequel, Downey nails a ridiculous one-liner to close the movie with a laugh and a hurrah from the audience. Oh, yes… you bet there’ll be a sequel!