Should you be rewarded with the American Dream just because of your outrageously bulging biceps? These dim-bulb bodybuilders sure think so…
By Lindaon April 24, 2013
0 Comments
Our Rating 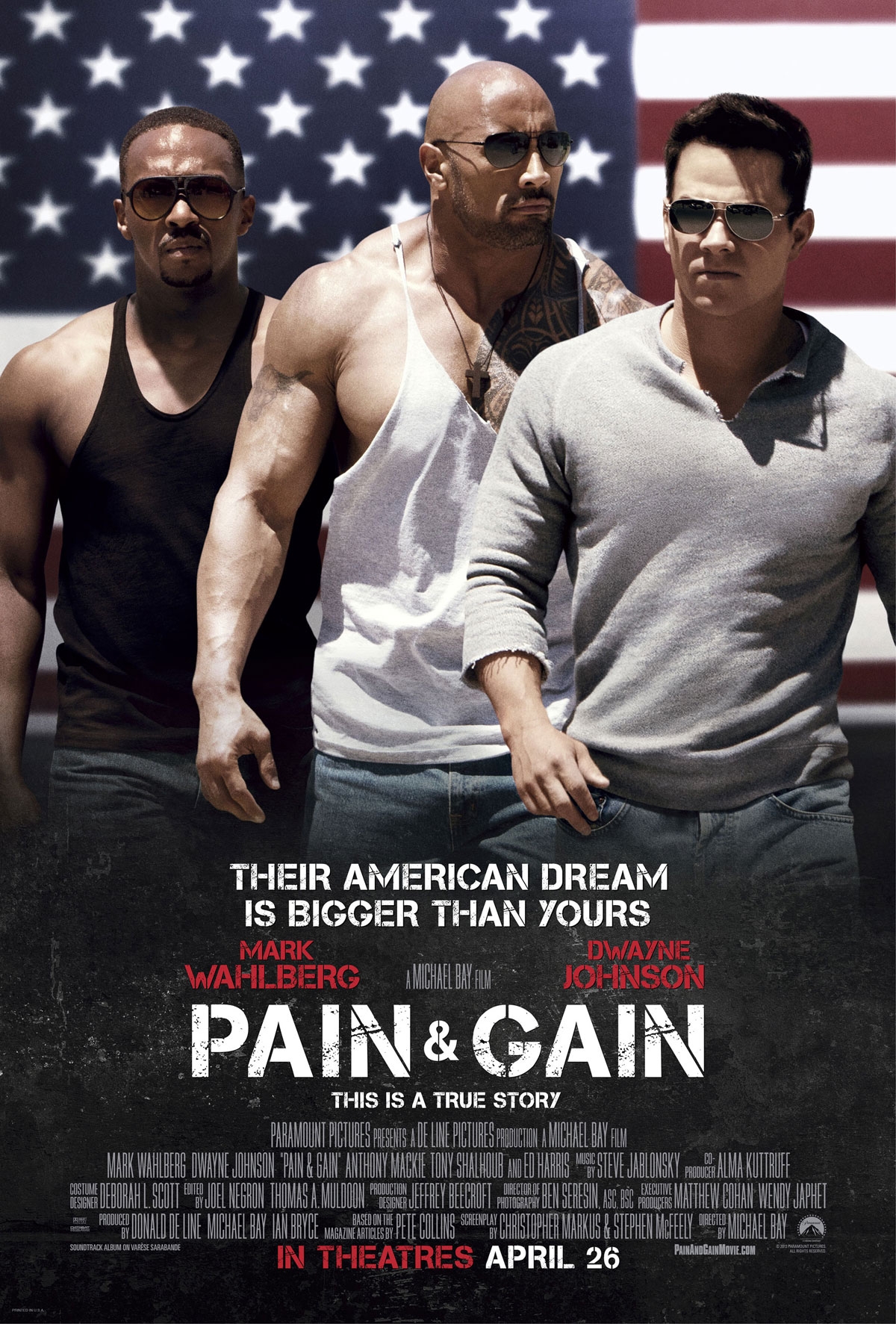 All I can say is, thank goodness that I didn’t see until the END credits that Michael Bay directed Pain & Gain. It totally would have colored the way I looked at the film, because it has been duly noted that I’m not his biggest fan. So, count me surprised that I found this over-the-top crime-spree on steroids (literally on steroids) comedy to actually be, well… funny.

Mark Wahlberg plays Daniel Lugo, a kind of dim personal trainer who, though successful at his Miami gym, can’t imagine wearing sweatpants for the rest of his career. He is an American, dammit, and should therefore be awarded with the American Dream, right? After all, his ridiculously, outrageously bulging muscles show his patriotism! The problem is, some customers at his gym, like the slimy, immigrant hot-dog magnate Victor Kershaw (Tony Shalhoub) seem to have all the money, hot cars, and hot chicks, when people like Daniel don’t. Brawn trumps brains, right? Danny has a plan. Just steal the American Dream from someone else!

Danny recruits a couple of equally-dim bodybuilder buddies, fast-food worker Adrian (Anthony Mackie) and the ex-con, Jesus-loving Paul (Dwayne Johnson), and the guys kidnap Victor. Now, even though this is a Michael Bay film, there are no explosions… but it does get pretty violent. Victor is not quite the easy mark that the boys all thought he would be, no matter how much he is tortured. But with some perseverance, they do get their way, fleecing the man for pretty much all he is worth. Now the question is, can “The Sun Gym Gang” actually handle their new wealth without getting caught?

Pain & Gain works because the script is a heck of a lot better than it should be, and the comic interplay between the thug bodybuilders has a natural zing to it. It sure doesn’t hurt when you throw in always-trusty supporting players in bit parts, like Rebel Wilson (as Adrian’s girlfriend), Ken Jeong (as an inspirational speaker), and Rob Corddry (as the gym’s manager). The movie could have easily had at least half and hour shaved off its bloated and bulging 2+ hour runtime. Also, it admittedly IS kind of disturbing in retrospect when you take a moment to think that this movie was based on a true story (thusly there are real victims involved in this crime farce). But this is America, right? We like violence for entertainment, and the thing is, Pain & Gain is actually really entertaining!