There are some films that I never need to see again, and I think Blindness is now one of them. 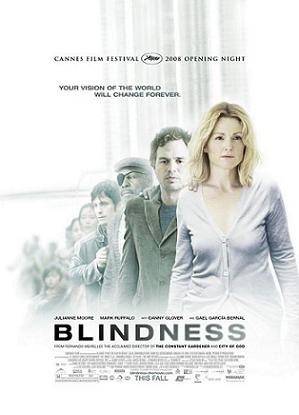 Blindness‘ “What if?” scenario is along the lines of such sci-fi/horror stories as Children of Men, Cormac McCarthy’s The Road, or 28 Days Later. Something happens beyond everyone’s control, sending humanity into a panic, and reducing everyone to mere animals to survive.

The film opens with a man (Yusuke Iseya) sitting in city traffic, and then suddenly he loses his sight. Everything has gone white, and he panics, accepting the help of a random passer-by (Don McKellar) who drops the man off at his home, then steals his car. This is where the horror begins, and the dominoes start to fall. The blind man sees an eye doctor (Mark Ruffalo), and the next morning the doctor can’t see either. A rippling panic ensues as the government (of this unnamed metropolis and country) gathers all the victims of this spreading epidemic and quarantines them in an old barracks-style building. There’s the original blind man, there’s the doctor that treated him, there’s the thief, and the thief’s wife, and the pharmacist who wrote a prescription for one of the doctor’s other patients (Alice Braga) that is also there… and so on.

When the doctor is rounded up, his wife (Julianne Moore) insists on joining him. Hell if she is staying home as he is carted away helpless. Except she can still see. Now that she is in the barracks in a room full of blind people, and days start to pass, she realizes that somehow the disease, or virus, or whatever it is has missed her. She has a clear advantage over all the other newly-blind as they stagger around, trying to adapt to their new condition.

Blindness descends into horror… deeply into horror I would say. Conditions worsen. Food becomes scarce. As the population of the blind in the quarantine swells, hygiene becomes non-existent, people wander naked in the hallways, stepping through shit and stumbling over bodies. The weak die or are shot by distant guards as they blindly stagger across the boundaries of the yard. And the strong inside the hellhole, namely a guy who proclaims himself King of Ward 3 (Gael García Bernal) throws his threatening weight around and decides that he’ll be the one to distribute what is left of the food. For a price.

There is an extremely disturbing scene that is as horrifying as it is probably realistic. How much would people sacrifice for food? When do you stick together as a group rather than selfishly watch out for yourself? The conditions of the squalor of humanity portrayed in Blindness is probably not as far-fetched as an audience would like to imagine, much less watch. And it sure isn’t entertaining.

With talk about bird-flu and deadly viruses filling the news, Blindness portrays a worst-case scenario of how such a mysterious and contagious plague could take down “civil” society in one fell swoop. Director Fernando Meirelles (The Constant Gardener, City of God) is certainly skilled, and creates an extremely disturbing scenario that could have been a cheesy popcorn flick in lesser hands. But even though Meirelles convinces me that such a scenario is entirely possible, it doesn’t necessarily mean I want to watch it for entertainment.