I’m sure I’m not the only one who didn’t expect much from Latter Days, a gay romance/comedy/drama from C. Jay Cox, whose most well-known previous venture was writing the screenplay for the popular but eyeball-rolling mainstream romantic comedy Sweet Home Alabama. Regardless of whether that movie was a fluke of his talents, or this movie is, I will say right now that I wasn’t the only one in the packed festival audience that was moved to tears by the end of this impressive directing debut. It ended up winning the Audience Award at the Seattle Lesbian and Gay Film Festival.
By Lindaon October 29, 2016
0 Comments
Our Rating 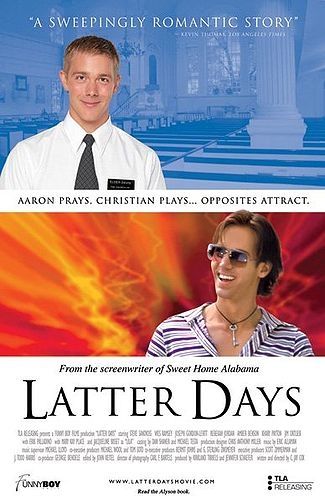 L.A. pretty-boy Christian (Wesley A. Ramsey) is blessed with modelesque good looks, and the effortless ability to pick up and take home any man he wants—even if the guy is seemingly straight! One day, a group of clean-cut guys move into a neighboring apartment, and Christian rubs his hands with the possibilities. But, alas! The fellows are Mormon missionaries! Rather than serving as a deterrent, of course the situation presents itself as his biggest challenge yet. At the fine restaurant where he waits table, Christian’s co-workers wager bets on whether or not he can bed one of the missionary boys, and he accepts the challenge with glee.

The focus of Christian’s attentions is sweetly handsome Aaron (Steve Sandvoss) who initially falls for Christian’s moves, but then backs off reluctantly. Christian is frustrated, but not because of his winning bet being thwarted. He finds himself really liking Aaron, and surprises himself by wanting to prove to him that he is not shallow. As for Aaron, the tension does not come from finding out whether or not he is gay, or whether or not he is attracted to Christian… that is presumed from early on. But the dramatic tension (the film takes a rather dark turn mid-way) is how Aaron’s homosexuality will affect his relationship with the church. Aaron has to come out to his religion and face the consequences.

Latter Days had the ripe opportunity to become cringe-inducing. It could have been a diatribe against the beliefs and lifestyle of Mormons, mocking the missionaries for their backward and ultra-conservative ways. But Latter Days impressively treats the religion with respect. Aaron is portrayed as a truly spiritual person; of the four missionaries, he is the best example of a young man who earnestly and selflessly wants to share the beliefs that give him the comfort of knowing his place in the world. It is Aaron’s struggle with coming out to the church, and risk being excommunicated because of it, that is the true drama of the film.

But don’t let the darkness of the previous paragraph deter you from seeing this film! The writing is sharp and funny (what happened with Sweet Home, I have no idea), and the supporting characters are all well-written and perfectly cast, from Joseph Gordon-Levitt as the hyper-righteous Mormon, to Jacqueline Bisset as the manager and mother hen of the restaurant employees, to Erik Palladino as an AIDS-stricken man who makes Christian acknowledge and accept his flaws.

But the heart of the film is Steve Sandvoss as Aaron. His character is so sweet and genuine, that you can’t help but feel for his heart-wrenching decision—whichever path he chooses, you don’t want him to get hurt. In the same way that Aaron has a positive effect on Christian, making a good person better, Steve Sandvoss takes a good movie and makes it pretty darn great. 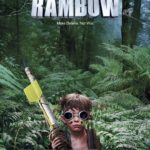