This film is an emotional rollercoaster of a family holiday movie. As in, my mood would swing from being surprisingly charmed by two subplots, to actively hating the film.
By Lindaon July 12, 2016
0 Comments
Our Rating 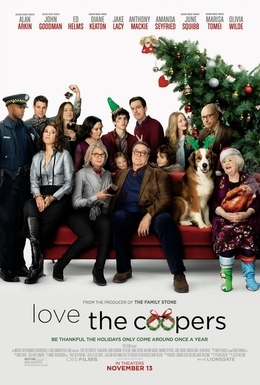 The Coopers, we are told through a nameless, relentless narrator, are an extended dysfunctional family clan, all trying to come together for Christmas dinner in snowy Pennsylvania. The parental hosts are Charlotte and Sam (Diane Keaton and John Goodman, a surprising and kind of strange pair, who struggle to make the most of a crappy script) who plan to hold it together for their adult kids before splitting up after decades. They bicker a lot, get wistful, and sing Christmas songs at the drop of the hat.

Many people are introduced, and it takes awhile to piece them together, especially as the ages don’t quite match up. For instance, Alan Arkin must have been 12 when his daughter Diane Keaton was born. And Diane’s sister, supposedly a few years younger, is played by Marisa Tomei, who is actually 19 years her junior. I’m not sure who is supposed to be flattered or insulted here, but I was kind of scratching my head at the magical timelines of the Cooper family. Let’s just say the Coopers are all annoying and/or uninteresting by default, except for two subplots.

Seemingly from another film, there is a very sweet story of an old man named Bucky (Arkin), who has a very close friendship with a young waitress named Ruby (Amanda Seyfried). Ruby deigns to tell her favorite customer Bucky that it is her last day at the diner. He leaves in fury and hurt, then comes back to profess his deep friend-love, to tells her how much she means to him. Arkin gets a speech in the diner kitchen that actually got me a little teary-eyed. Then I almost cried again when it was revealed that Bucky was one of the Coopers, and was on his way to their house. Meh.

The other story that was quite charming involved daughter Eleanor (Olivia Wilde) picking up a flight-stranded soldier named Joe (Jake Lacy) at the airport, begging him to be her boyfriend for the night, so that her parents won’t dismiss her as a flighty loser again. Eleanor and Joe are extremely appealing as they test-flirt their way into getting to know each other, finding out how quickly one’s flaws reveal themselves under pressure. I kind of hate romantic comedies, but I kind of loved these two. But… oh, crap. Eleanor is a Cooper. Guess where they were going?

Triple the amount of characters I’ve mentioned, then suck all the life out of the party, and you get the culminating Christmas gathering at the Coopers. Wow, what any annoying, cheerless, unfunny bunch. Let me sit passed out drunk in the living room with Aunt Fishy (June Squibb), rather than suffering through Christmas dinner with this bunch. Love the Coopers? Not so much, thanks.