In a time where our own politicians are in no need of parody (all they need to do is open their mouths), it is always fun to see a sharp political comedy. The best offer a shrewd narration of the political process, for better or (usually) for worse, and can be a timely wake-up call. Our Brand is Crisis, which is based on a sharp 2006 documentary of the same name, wants to be one of those sharp political comedies. The ingredients are definitely there, and the stars are game, but unfortunately, it never quite gels. 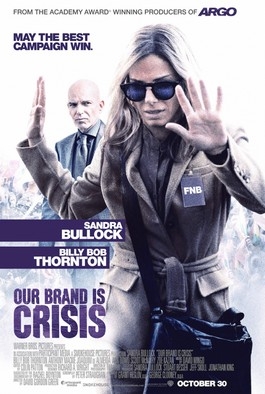 Sandra Bullock plays “Calamity” Jane Bodine, a political consultant apparently so ruthless that she can make even the most shady, incompetent politician into a winner. But Jane has been “retired” for several years, retreating after her client lost a particularly ugly campaign. But when the U.S. decides they need to influence the presidential campaign in Bolivia, Jane is lured from retirement.

Now, since Jane is played by That Nice Sandy Bullock, it is hard not to like her. Her initial presence is played for broad laughs: She gets altitude sickness easily (Bolivia’s capital has a high elevation) and is seen barfing in a bucket in the board room as the campaign strategists try to convince the candidate that she is the real deal. A corrupt former president, Castillo (Joaquim de Almeida) wants to be in power again, but has an image problem with the public’s long, distrusting memory of him. Meanwhile, Jane is constantly disheveled and stumbling around, seemingly like she lost the set for Miss Congeniality. But then suddenly her prowess kicks in, and she has all the answers! Really, all she cares about is beating the candidate puppeteered by her American nemesis, Pat Candy (Billy Bob Thornton).

The idea of Our Brand is Crisis is certainly fascinating with a big scoop of horrifying. I pay attention to world news, and know that our government likes to influence other countries, but it never occurred to me that our sleazy strategists would be sent to other countries to influence an election. This is truly eye opening. But such a fascinating base story is muddied by poorly written characters and an inconsistent tone.

This movie should really write itself (and apparently it did, in the previous documentary). Instead, we are given a slapstick character, who is introduced as hating crowds, not liking to be touched, and a total basket case living in the woods, then after the first 15 minutes, she is… fine. What the heck is her story, anyway? There has to be more than just a botched election, as we are led to believe that Jane’s reputation precedes her on a national level. Bullock is an appealing actress that most of us would be happy to follow anywhere, but Our Brand is Crisis just gives us a shell of someone to follow. Kind of like the election itself.