Though the movie is titled Marshall, it ends up feeling like he is a bystander in the movie that bears his name.
By Lindaon January 27, 2018
0 Comments
Our Rating 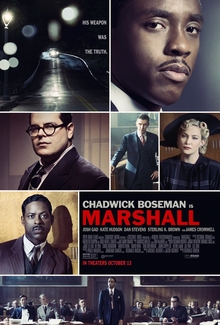 If a trial lawyer were to have a superpower, it would be his or her power of inquisition and persuasion. To take away a lawyer’s voice in trial is to muzzle their best weapon in a fight, and that is what happens to Thurgood Marshall in the 1941 case of Connecticut vs Joseph Spell.

Thurgood Marshall (Chadwick Boseman), future Supreme Court justice and all around well-dressed badass, is sent by the NAACP (as their only lawyer) to represent Spell, who is accused of raping and attempting to kill a white socialite woman in Bridgeport, Connecticut. Eleanor Strubing (Kate Hudson) crawled out of a reservoir, flagged down a car, and claimed that her black chauffeur Spell (Sterling K. Brown) raped and attempted to kill her by tossing her off a bridge. Spell claims innocence, and it is Marshall’s job to defend him.

The problem is, Marshall is from out of state and needs a local lawyer sidekick to get his foot in the proverbial courtroom door. Enter the unwilling partner: Insurance attorney Sam Friedman (Josh Gad). He is out of his comfort zone and they both know it. The problem, they quickly find out, is that the judge for the case has decided that Marshall can attend the trial, but is not allowed to speak. Take away the superhero, and the sidekick has to jump in to save the day.

Marshall is a movie of very broad strokes. It’s a courtroom drama/lawyer buddy movie for the masses, and that is not necessarily a bad thing. I felt afterwards that it could be a good introductory history lesson for, say, high school kids as it touches upon lots of hot-button topics like racism, anti-Semitism, and other grim aspects of our civilized society that haven’t evolved as much as we’d like to think. But it has all been done better, and with more emotional impact elsewhere. This is a movie where you figure out almost immediately what really happened on the night in question between Spell and Strubing, but it just takes a whole movie to catch up to the obvious.

Boseman’s swaggering Marshall serves as a sensei to Gad’s Friedman. But because of the muzzle restriction, it ends up being Friedman getting the juicy courtroom scenes. As Friedman grows and learns on the job, he ends up being a far more interesting character than Marshall, who almost ends up being a supporting character in the movie that bears his name. We all know that Marshall is one of the more fascinating people of the last century, so it was disappointing that Marshall ends up being more of an origin story for Sam Friedman. If there is another film made about Thurgood Marshall (and there should be), let’s hope he gets to be the star.