The Mountain Between Us

Oh, man, what a crying shame to waste two such beautiful, talented, sexy people as Kate Winslet and Idris Elba in a survival romance as frigid as a snowy mountaintop.
By Lindaon January 27, 2018
0 Comments
Our Rating 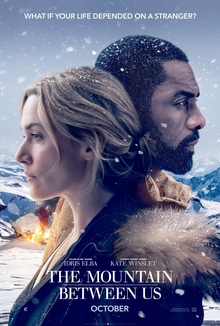 Kate Winslet plays Alex, a photo journalist whose investigative arsenal seems to consist of asking the question, “Are you married?” over and over. Idris Elba plays Ben, a serious, emotionally closed brain surgeon who dismisses the heart as “just a muscle” (get it? he has no heart). Both Ben and Alex are outrageously attractive people that are stranded in an Idaho airport in the winter, trying to get back to New York City (where outrageously attractive, intelligent people always congregate in the movies). They spontaneously charter a small plane to fly them to Denver, and as soon as pilot Beau Bridges says, “No, I didn’t file a flight plan, I’m just going to fly VFR!” you know that they are all doomed.

One pretty cool plane crash sequence later (after Bridges hams it up having a stroke and yanking the steering column every which way for effect), they are indeed stranded on a snowy mountaintop in the middle of nowhere. The pilot is a popsicle, but his dog survives, as well as our two attractive leads. The problem that we figure out quite quickly is that Alex and Ben are both quite boring. Laid up with a broken leg and other injuries, Alex is stuck bundled up in the remaining body of the plane while Ben just lights fire after fire waiting for help. A little bit of over-the-top action happens when Ben goes off to check out the scene and Alex almost gets her face eaten off by a cougar (???). You’d think when they finally make a go of walking to civilization that we might get some Revenant-style survival action, but no such luck.

You know from the trailers that these two are destined to get together, because that is what happens in survival situations where two attractive people think they might die. It’s too bad that Winslet and Elba are as spark free as a lighter without fluid. The cursory love scene conveniently happens in a moment when they have found shelter and even a bed (no getting busy on a pile of twigs!) where they look surprisingly clean (with, in her case, miraculously hair-free armpits!). I’d almost say that there were 50 lit candles in the scene, but I think I’m making that up.

The question is, will this “survival-love” survive, well, survival? Would these two make it together in the real world after such a trauma? Will their lives ever be the same? Don’t worry, your questions get answered because not only does The Mountain Between Us go on an additional half hour or so after the natural ending, but it pulls out all the stops of a cornball ending where Elba and Winslet almost look embarrassed at what the script is asking them to do. You may have thought you were going to see a cool movie about survival against all odds, whereas the closing credit power ballad reaffirms that you just saw a cheesy Nicolas-Sparks-style plane crash love story.