A triptych coming-of-age story about a young African-American man finding his way, ends up having a universally poetic appeal.
By Lindaon May 4, 2017
0 Comments
Our Rating 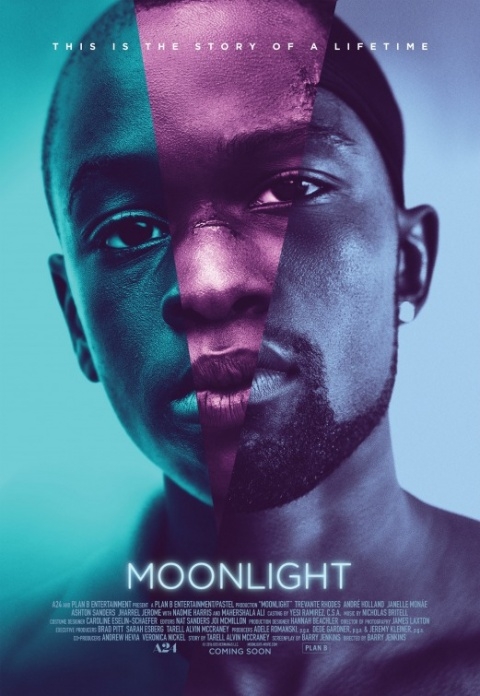 Taking place in a rough, drug-addled neighborhood in Miami, Moonlight introduces us to a character in three chapters. “Little” (Alex Hibbert) is a cripplingly shy kid who is relentlessly bullied at school, who can’t even find solace at home where he lives with his crack-addled mother (Naomie Harris). A surprising friend comes in the form of Juan (Mahershala Ali), a kindly drug-dealer, who becomes a sort of father figure to Little. The slow forming of their relationship is rather sweet, until Little makes the connection that Juan sells drugs to his own mother. In the quietly devastating scene where Juan admits this to the boy, you may as well well rip my heart out and smash it on the floor.

The middle chapter “Chiron” follows our character as a teen. Now played by Ashton Sanders, he is a spindly young man, still walking with his head hanging low, avoiding eye contact, clutching his arms protectively. Schoolyard heckling has turned violent, with Chiron physically threatened by a bully who taunts him for being gay. Chiron lives his days so withdrawn that he curls into himself, until his friend Kevin (Jharrel Jerome) shows him surprising tenderness.

In the final chapter “Black”, it’s 10 years later and Chiron has adopted Kevin’s nickname for him and Juan’s persona. How could this spindly kid have turned into a muscular drug dealer with a gold grill on his teeth? Trevante Rhodes as Black physically bears no resemblance to the character’s younger actors (apparently director Barry Jenkins did not cast them for looking similar). But to Rhodes’ credit, you start to see Little/Chiron in Black’s eyes, especially when he gets a phone call out of the blue from Kevin (André Holland) whom he hasn’t seen in years. The two meet up in a diner where Kevin works, and the men, now so different, take time to slowly start to recognize each other in their glances. Let’s just say, there is a cinematically perfect moment featuring a song on the jukebox… and you may as well rip my heart out and smash it up again.

Moonlight seems almost a companion to Boyhood, featuring a parallel but oh-so-different path of a boy becoming a man in modern America. Though Little/Chiron/Black grows up in a drug-riddled neighborhood, abused and ostracized, his story still manages to be universally relatable. He is just trying to find himself and his place in this world. Moonlight is a sad, lovely film.