Based on a true event that happened in Texas in 1969, The Sugarland Express, in a nutshell is Bonnie & Clyde meets Smokey and the Bandit.
By Lindaon December 27, 2014
0 Comments
Our Rating 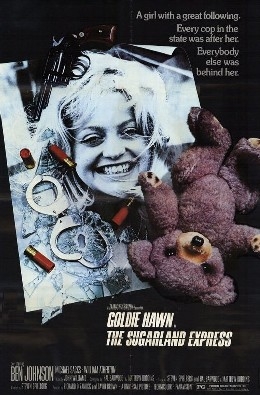 Lost in the shuffle between Steven Spielberg’s acclaimed first movie, the made-for-TV thriller Duel, and his blockbuster shark tale Jaws, was a chase movie called The Sugarland Express. I must admit, I had never really heard much about this film, nor knew it had any association with Spielberg. But it turns out it was in fact his theatrical directorial debut (Duel was made for TV), and starred the very hot starlet, Laugh-In‘s Goldie Hawn.

Based on a true event that happened in Texas in 1969, The Sugarland Express, in a nutshell is Bonnie & Clyde meets Smokey and the Bandit. Lou Jean (Goldie Hawn), breaks her petty-crime husband Clovis (William Atherton) out of jail (she herself just got out), and they steal a car in order to go and get their infant boy, who has been given to foster parents. The couple thinks they can just waltz in to Sugarland, Texas, where their son’s new parents live, grab their kid, and live happily ever after. Well, life doesn’t ever work out that way… especially in the movies.

Picking up a police officer hostage (Michael Sacks) on the way, they race across Texas in a stolen police car, and soon they have quite the entourage of cops following them in a line as far as the eye can see across the Lone Star landscape. Hot on their tail is the police captain (Ben Johnson), who has a bit of a soft heart. Despite his sympathy for the “kids” he begrudgingly knows that no matter what happens, chances are things won’t end well.

As a chase film, The Sugarland Express starts fast, and never lets up. As the patrolman hostage starts to warm to his captors, so does the audience. Lou Jean and Clovis are buffoons on the surface, but mean well, and know they are in deep shit. I can see that Goldie Hawn impressed audiences who only knew her as the silly girl from comedy television. She shows her acting chops, and only resorts to her cute-as-pie smile in a handful of scenes. The cast is solid, the pacing is gripping, and The Sugarland Express is a fun ride. Spielberg fans should check out this little known crime caper/road movie to see an early film by the director who went on to become the biggest in Hollywood.