Mork and Mindy: The Third Season 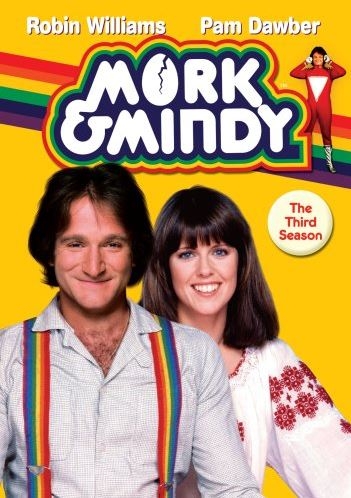 When I was little, I thought Mork and Mindy was the funniest, edgiest show on TV. I felt like I had a very important date every time it was on, and I made a pointed effort to mention it at school, just to show how incredibly hip I was. I even had a Mork doll that said things like “Shazbat!” and “Nanu nanu!”

A couple of years ago I decided to write to Robin Williams and ask for an autographed picture to accompany my doll, and within a couple of weeks I had an autographed 8×10 and a hilarious form letter in my hot little hands. Weirdly, the 8×10 was of Robin in One Hour Photo, wearing a bald cap and looking at a roll of film—kind of arty, but also kind of creepy. The form letter addressed just about anything anyone might have said to him: “If you’re writing about ___ Robin thanks you,” etc. And then I got to the part aimed at me. It said something tantamount to, “If you’re writing to say how much you still love Mork and Mindy, Robin seriously suggests that you move on with your life.” Oh. Ahem. Okay then. But it made me wonder—is that why I got the sinister picture? Did people with better taste get 8×10’s from Dead Poet’s Society?

To be honest, I hadn’t seen Mork and Mindy since the mid-80’s, so I had no idea how it would hold up. I threw on the Season 3 DVD, and immediately understood why Robin felt the show would best be left in the past. If I didn’t remember it fondly from childhood, I’d probably think it was retarded. Oh, it’s silly and wacky and fun, but those are qualities most prized by six-year-olds.

In case you’re unfamiliar with the show, Mork (Robin Williams) is an alien from the planet Ork. He arrived on Earth in a jaunty red and silver spacesuit, and emerged from a giant egg. The beautiful, sensible, and very open-minded Mindy (Pam Dawber) was good-hearted enough to take him in, and comedy ensues as the two cohabitate in her Colorado apartment. Sometimes their neighbor (Tom Poston) drops by with some deadpan one-liners, and one of their very best friends is played by Jay Thomas. At the end of each episode, Mork reports to Orson (back on Ork) about the ways of the humans. More often than not, he’s there’s a thoughtful little moral to his adventures.

Season 3 finds Mindy moving on from her job at the record store to a new position at a local television station. Mork is very supportive, and sometimes manages to stay out of trouble long enough to help Mindy out. In one episode, Mindy practically kills herself trying to get an interview with hot young comic Robin Williams, and they finally sneak into his dressing room because Mork looks so much like him! Oh my gosh, are you laughing already?! And THEN, using split screen technology to brilliant ends, Mork and Robin meet face to face! Well, they meet from across the room, but it’s kind of cute anyway.

Mork and Mindy will never get points for sophistication, but for what it is, Season 3 is rock solid. By Season 4, Mork and Mindy get married, and, appallingly, have a baby played by Jonathan Winters (Orkans age backwards). In this set, there’s not a hint of the horror that is to come. Pam Dawber is a better straight man than I remembered, and it’s fun to see Robin Williams in such lightweight fare, now that he’s proven himself to be one of the most versatile actors alive today. There are some surprisingly timely references to supporting solar energy and eliminating gas-guzzling cars, and a joke about Marie Osmond is appropriate all over again. Check it out if fond memories draw you back, or take Robin’s advice and just move on. Either option is perfectly valid.