If there’s one thing I’ll watch, it’s a movie about a grieving man with frying pan hands. 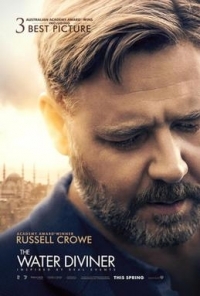 Directed by and starring Russell Crowe, The Water Diviner is an ambitious film that incorporates elements of romance, adventure, tragedy, action, and drama. You could simply call it a war movie, but really, the main thing you need to know is that The Water Diviner is about a grieving man with frying pan hands.

Connor (Crowe) is, as the title suggests, a water diviner in the Australian Outback. He’s rugged and strong, adept at making something out of nothing, but sometimes life leaves even the most resourceful individuals with too little to work with. His three sons never returned from World War I’s infamous Battle of Gallipoli, his wife’s sanity, consequently, hangs by a thread, and every day he asks himself why he encouraged his boys to serve their country over something so pointless. After unexpectedly losing his wife, Connor realizes there is nothing left there but guilt and ghosts. Why not walk away from it all and attempt the impossible task of finding his boys?

Quite uninvited, Connor makes the journey to Turkey with the intent of searching for his sons’ bodies and bringing them home to Australia. Though a recovery effort is already underway, no civilians (and certainly no foreigners) are allowed onto the battleground. Nothing remains but rubble and corpses, a haunting nightmare of senseless carnage.

Connor himself is an inexperienced but determined traveler, perhaps aided by his own naivete. When he reaches an obstacle, he simply looks for a crack in the wall and skitters through it. He is quickly befriended by a funny, ambitious little boy who literally drags Connor to his mother’s hotel. Though not pleased to have an Australian under her roof, Ayshe (Olga Kurylenko) allows Connor to stay. Steeped in denial about her own husband’s disappearance, Ayshe soon learns that she and Connor have a great deal in common.

From this point forward, the film unfolds in a variety of unexpected directions. By making and utilizing a series of tenuous connections with locals, Connor manages one small victory after another. The setbacks are many, but with nothing to lose, Connor persists and comes away with the ultimate reward. At times it’s difficult to read the tone and direction of The Water Diviner, but the film does stay on track and builds to a moving conclusion. Considering the monumental task Crowe faced in carrying the movie, it’s impressive that he was able to capture the atmosphere of an epic while remaining focused on the emotional center of the story.

Special features include “The Making of The Water Diviner” and “The Battle of Gallipoli”, which looks back at the historic battle on its 100th anniversary. If it’s been awhile since you’ve studied Gallipoli and you’re rusty on the details, it’s probably helpful to watch the featurette before the movie for context.