“I want the severed head of Phil Collins in my fridge by the end of the decade. And if I haven’t, I’ll be a failure.” – Noel Gallagher 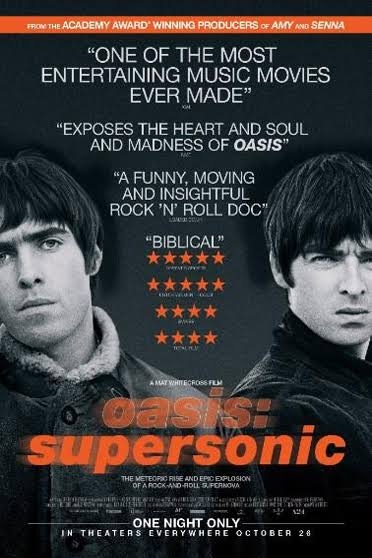 I have a love/hate relationship with Oasis. I adored their catchy pop-rock sensibilities in the 90s, especially the masterpiece that is “Wonderwall”. But then I saw them in concert, and was faced with a bunch of arrogant brats who threw water bottles at the audience and sneered at us with disdain. Part of the issue was that it was a U.S. tour (so, smaller arenas and not football stadiums), but, really? We PAID to see you. As one of the Gallagher brothers states in Oasis: Supersonic: “You won’t get anywhere with attitude in the States.” Damn right.

From the same producers as last year’s Oscar-winning Amy, the band is given the rock-god documentary treatment in Oasis: Supersonic, which mainly profiles the brothers Liam (singer) and Noel (songwriter) Gallagher, the most famous unibrow faces of the band. Maybe not exactly the overnight success they were thought to be, it is still rather astonishing that a band that had been around less than two years had a huge hit song before they even had their first album recorded. For anyone who has listened to their debut “Definitely Maybe” as many times as I have, it is intriguing to hear some of the first unsuccessful recordings when they couldn’t get their sound quite right. Finally, after a slew of producers failed, Owen Morris stepped in and basically just turned up the volume levels on everything, creating the thick wall of rock that makes the album such a volume-cranker.

Oasis was known to be full of strife, brawls, and drug use. Their introduction to the U.S. involved a crystal meth-fueled show at Los Angeles’ famous Whiskey A Go Go that resulted in a thrown tambourine and Noel disappearing for two weeks to San Francisco. And all of this happened before they REALLY hit it big. “(What’s the Story) Morning Glory?”, their huge follow-up, was recorded briskly, a song a day, with astonishingly little fuss and re-recordings.

Oasis: Supersonic goes straight up like one of the fireworks that close the film. Culminating with the massive 1996 concerts at Knebworth in the UK, which drew 250,000 people over two days, you’d think that things were just rosy. But in the voiceovers, the band pretty much admits that they should have done a mic-drop at that point, as where can you go from the top? Funny enough, as the film ends with the success of “Morning Glory”, that also aligns with the last time I (and probably many others) really paid attention to the band that continued straggling along for a while (which is not mentioned in the movie). Oasis: Supersonic doesn’t have the dramatic story arc as Amy, so probably won’t have an impact on viewers who are not really fans. As it is, it’s a fun time capsule for those of us who did listen, if only to find out why the band always seemed so pissed at each other.