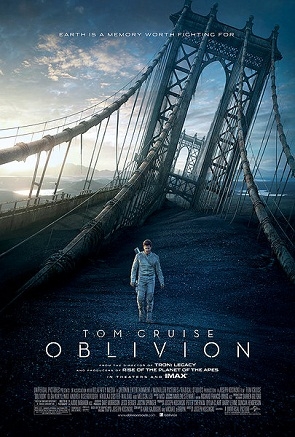 Tom Cruise stars as Jack Harper, a service tech working on a decimated Earth some 65 years in the future, who’s plagued by dreams of a dark-haired woman in the past. An alien invasion has left the planet in ruins, and all of humanity is now happily ensconced on Saturn’s moon, Titan. Well, everyone save for Jack and his partner, Victoria (Andrea Riseborough), who are overseeing the safe harvesting of what remains of Earth’s water for transport through the galaxy to their new home. Jack and Victoria’s only contact is Sally (Melissa Leo), an eerily Stepfordian commander with mission control, who oversees their work and issues order via whatever Skype is called in 2077.

Everything is going according to schedule until Jack stumbles upon a rogue radio beacon being transmitted into space, and a NASA vessel – complete with astronauts suspended in some sort of cryo-sleep – crash lands in the middle of nowhere. When one of those astronauts turns out to be the dark-haired woman from his dreams, and Jack’s mission commanders start vaporizing the crash survivors, Jack begins to question the truth, his job and the reality he’s always known.

Now, while that all sounds exciting, it actually isn’t. The story plods along very slowly, with lengthy, inconsequential sequences – desolate landscapes, Jack and Victoria getting frisky in the pool, Jack pondering life – that could easily have been left on the cutting room floor to trim the 126-minute running time down a bit. There’s a great deal of style in Oblivion, but precious little substance – the actual “meat” of the story probably takes up about half and hour, cumulatively, but is stretched well beyond that. And the pseudo ‘80s power-rock instrumentals on the soundtrack are very heavy-handed and not at all subtle, to the point where their presence becomes distractingly obtrusive.

As for the performances, Cruise is admittedly solid in a trademark Cruise role, and has decent chemistry with both of his surprisingly effective (given the material) leading ladies. Riseborough, best known for W.E. uses her Kate Winslet-iness to great effect here, and Kurylenko manages to give some depth to a character who would otherwise be fairly two-dimensional. Morgan Freeman turns up in what amounts to a glorified, somewhat campy cameo as the leader of a band of human rebels, but he seems wasted in the role.

The film’s major plus is, as mentioned, the visuals, which are stunning – regardless of whether they’re real (the lava rock and black sands of Iceland) or digitally created (pretty much everything else). The skyscapes, landscapes and dreamscapes are all beautifully shot, and seeing the film in IMAX is almost overwhelming, in a good way. Yet, even though I will fully admit to getting a little choked up at the end, that – plus all the pretty pictures to look at – still doesn’t quite make up for the lackluster tale at the core of what could have been a really amazing film. 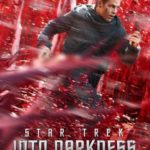 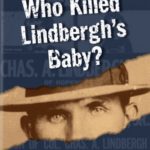