DINOSAUR SMASH. That’s about all you need to know in terms of what to expect from this high-concept popcorn-movie sequel.
By Vickieon July 12, 2016
0 Comments
Our Rating 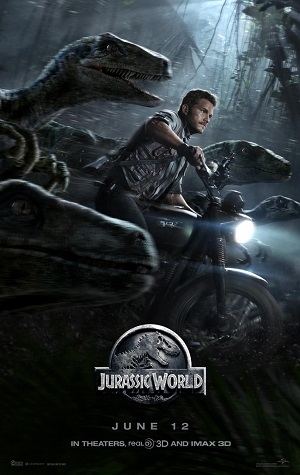 Proving that those who do not learn from history will continue to repeat it as long as moviegoers are willing to shell out money, Jurassic World delivers is an action-heavy, plot-deficient spectacle that features more foolish humans learning the hard way that manipulating nature and hatching dinosaurs is a very, very, very bad idea.

This time around, the humans in question are led by icy, buttoned-down executive Claire (Bryce Dallas Howard), who – with her perfectly flat-ironed hair and Type A approach – is in charge of the massive, dinosaur-filled titular theme park on the reopened Isla Nublar. Claire’s all about turning a profit, and she’s sure the park’s top-secret new attraction – a giant, genetically engineered, brand new dinosaur dubbed Indominous Rex – will have visitors (and their money) flooding in. Sitting on the opposite side of the “isn’t this a GREAT idea?!” fence is Owen (Chris Pratt), a rugged, lives-in-a-shack-by-the-beach-and-rides-a-motorcycle behavioral researcher, who trains raptors and knows an awful lot about what your average dinosaur will and will not do. (Hint: will kill you when it gets the chance, will not hesitate to kill you when it gets the chance.)

I’ll give you three guesses what happens shortly after the Indominous Rex is introduced in the film. Anyone? If you said “escapes from its pen and wreaks havoc, leaving a bloody trail of destruction in its wake,” you’re correct! (And you clearly remember the events of all previous Jurassic films better than any of the characters in this one.)

Adding an extra layer of tension to the proceedings is the presence of Claire’s nephews, eager dinosaur-superfan Gray (Ty Simpkins) and his nonplussed older brother Zach (Nick Robinson), who are visiting their aunt and wind up eye-deep in peril, caught amid the mayhem. Because, as soon as Indominous Rex starts marauding, the dino gloves come off and every prehistoric species on the island runs amok. Literally.

Loud, chaotic and, as ever, needlessly rendered in 3D (which adds nothing, why bother?!), Jurassic World is an unabashed action-adventure that leans more heavily toward mindless action than thought-provoking adventure. There’s no deep message, there isn’t any thoughtful character development (everyone is essentially an archetype or stereotype), you won’t find long, thoughtful stretches of dialogue – it’s an all-out roller coaster of dinosaur-rampage splendor, with epic inter-species fights, rollicking chase sequences and umpteen moments of Indominous Rex making mincemeat of, well, everything and everyone in its path.

Yet, for what it is, it still works.

Its straightforward story and increasingly chaotic sequences keep things moving, its CGI dinos look more real than they ever did in any of the previous films, and the whole thing just screams “blockbuster summertime entertainment.” The filmmakers scored a terrifically engaging lead in Pratt, who’s relentlessly charming and likeable. We’d watch him in just about anything at this point, and his presence earns World at least a couple of its slices above.

Howard isn’t as great, but makes for a decent foil-turned-ally. Her character’s ubiquitous heels become something of a running joke (pun intended) – how she manages to sprint through a dense jungle without so much as a minor wobble is a feat in and of itself – and her coif serves as an excellent danger barometer. At the film’s outset, when she’s rigid and self-possessed and running her well-oiled capitalist machine, nary a single hair is out of place; by film’s end, when all hell has broken loose (and Claire has loosened up), so has her hair, becoming all beach-y waves and tousled-like.

Here’s the bottom line, though: despite any flaws, ultimately Jurassic World gives audiences exactly what they want and expect. It will draw huge crowds and earn piles of money at the box office. And in the end, at least as far as the filmmakers are concerned, that’s really what counts.