With some of its inspired moments of sheer cleverness, Operation Avalanche may have you slightly convinced that the moon landing could have been faked.
By Lindaon May 4, 2017
0 Comments
Our Rating 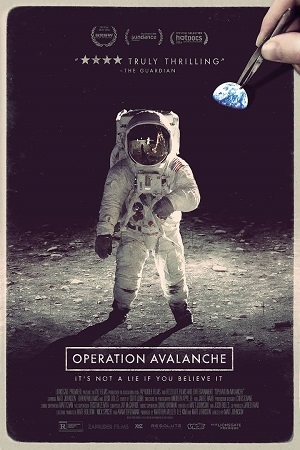 Director/screenwriter Matt Johnson stars in Operation Avalanche as a variation of himself… if he were a guy named Matt Johnson, who was also a filmmaker, who happened to work for the CIA (dream on!) in the Cold War. Matt and his buddy Owen (Owen Williams) hear that there is a Russian mole in the space program, so offer to go undercover as documentary filmmakers making a film about the Apollo mission to see if they can unearth the spy. Instead, they find out something that most at NASA don’t even know: The U.S. despite a promise of a man on the moon, isn’t ready.

In a completely hush-hush cover-up, Matt and Owen recruit a small team to create the film that will show the Apollo astronauts land on the moon. When Apollo goes to the dark side of the moon, the astronauts will just switch out the live feed and turn on the video. Houston won’t even need to know! Easy, right? Conspiracy, as we know, is never easy…

Operation Avalanche, filmed to look of the period, is at its best when it shows the crew figuring out how to create a film of a place no one has been. First, there is the simple: Wear a spacesuit and jump up and down in the sandy desert at night… just slow down the frames, and it looks like there is less gravity! But then when they get a budget, it gets more technical. The capsule has to look real, as does the landscape. It has to be on (a very early version of) video, but only after being created on film. There is even a part that has the team go to the UK to crash the set of Stanley Kubrick’s movie “about the moon landing” (which we all recognize as 2001: A Space Odyssey). The low-budget look of Operation Avalanche is seamless–that actually IS Kubrick giving an autograph to Matt!

But where the film falters is not in its passion for the subject, that is clear. Rather, a few minutes into the movie I thought to myself, “I’ll bet you anything that the lead actor is also the director.” Yes, Matt Johnson wears many hats for this film, but he should have given up a few. Namely, as an actor he is kind of annoying. There are few directors that are strong actors, and vice versa, so next time around Johnson should stick to screenwriting with Josh Boles (who also co-stars).

Operation Avalanche has more than a whiff of an independent labor of love project. It thrives on being excessively clever, sometimes at the extent of character and story. But the clever is quite clever, making it an interesting little indie for space and conspiracy buffs.