Restored in 4K glory, Liquid Sky is a gorgeous, if baffling account of a New Wave druggie diva and her relationship with a space alien.
By Lindaon April 29, 2018
0 Comments
Our Rating 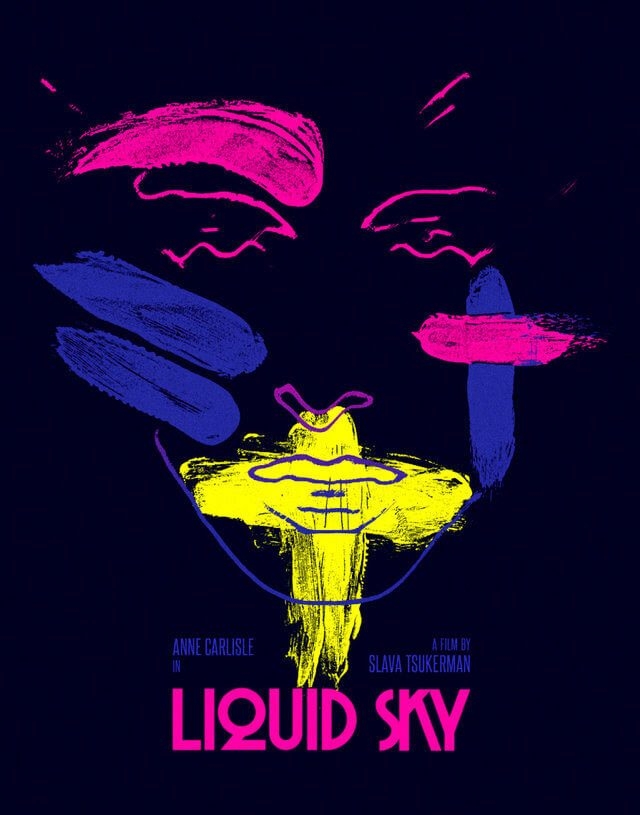 What does one do with a movie like Liquid Sky? I saw a crappy DVD version of it years ago, and was so baffled that I forced it on my Movie Night friends as part of a double-feature. Due to protests from my friends about the movie being unbearably awful, I was forced to turn it off after 10 minutes.

Revisiting the film again years later, restored in 4K glory, I have to admit it is a gorgeous, if still baffling account of an arty version of the Manhattan “punk” scene (aka New Wave, if you have half a brain), and one gorgeous, sullen diva’s relationship with an alien that pulls power from her sexual partners.

Beautifully androgynous Anne Carlisle plays Margaret, a sullen monotone model who frequents the drug-addled New Wave club scene and tends to hook up with all sorts of rapey people. Carlisle also plays Jimmy, a sullen, monotone model, who is a little bitch who calls Margaret “chicken” over and over to the leering catcalls of their glamorous social circle. Needless to say, when a dinner-plate-sized alien spacecraft lands on Margaret’s divey penthouse roof, she probably doesn’t mind that it taps into sexual energy to make all of the rapey douchebags (male and female) in her circle disappear as soon as they orgasm on/in/via her. (The only joy Margaret seems to get out of the whole thing is that her sexual partners disappear immediately into thin air.)

It is certainly a curious film that you will either watch with gritted teeth or baffled delight. Released in 1982, it was co-written and directed by a Russian (Slava Tsukerman) and starred mainly acting students (along with their own teacher, playing an older lover/early victim of Margaret). Apparently it was a cult hit for years, and became very hard to find on video, except as a pirated copy of a copy.

Fans of this film will certainly be delighted with this restored release. (My middle of the road rating is merely for my still kinda-cringey response to the film itself.) The extras on the Blu-ray seems to track down just about everyone involved to have their say about the film, from Carlisle (who co-wrote the screenplay) to Tsukerman (who has feature commentary) to many of the cast members and crew. There is a full live Q&A session from a screening at the Alamo Drafthouse, as well as an almost hour-long feature “Liquid Sky Revisited” about the making of the film. Perhaps the most out-of-nowhere interesting “where are they now?” cast revelation is about the untimely passing of Deborah Jacobs Welsh, who was a flight attendant on the doomed hijacked United Airlines Flight 93 that crashed on 9/11.