There’s something about Tombstone that reeks of a high school play, with hotshot actors indulging their fantasies of wearing cowboy hats and boots, and sporting moustaches that they can twirl with glee. The cast is so recognizable, despite their cool Western duds, that it completely distracts from taking the movie seriously. 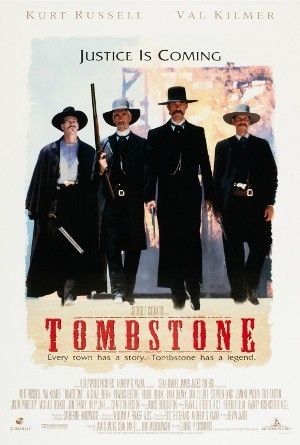 When Tombstone came out, it was the battle of the Wyatt Earp movies, with Kevin Costner’s Wyatt Earp being released within a year of this one (as Hollywood is wont to do). I remember hearing that Tombstone was the superior rendition of the tale of the Earp brothers’ showdown with the bad guys in the O.K. Corral. And each film boasted a scene-stealing performance by the actor who played right-hand man Doc Holliday (Dennis Quaid in Wyatt Earp, and Val Kilmer in Tombstone). But somehow I missed both films at the time, so it wasn’t until now that I got to check out the more popular version.

Honestly? Is this it? Maybe it is because I got to watch Tombstone without the fuss and bother of its original release, or maybe it is because the film exudes big-budget Hollywood gloss… but really, I was expecting more.

Kurt Russell plays Wyatt Earp, with good, thick hair, twinkling Kurt-Russell eyes, and a long, twirlable moustache. To me, Kurt Russell is one of those actors that I inexplicably like despite his relative inability to not play anything other than his likeable self in a role. So sue me. Sam Elliott, who was born to be in Westerns, plays older brother Virgil, and Bill Paxton plays eager-to-please younger brother Morgan. The Earps show up in Tombstone not wanting to be involved in the law, but as Wyatt’s reputation precedes him, the locals plea for his and his brothers’ help with the wild, lawless roughnecks known as The Cowboys.

Powers Boothe (with an evil laugh) and Michael Biehn (with crazy eyes) play the main bad guys. But they, like the other actors, are so familiar, that it is hard to suspend your disbelief that this whole thing is not taking place on a Hollywood set. Dana Delany shows up, horribly miscast as a traveling entertainer and love interest for Wyatt (where his wife is dropped from the plot like a hot potato). Sillier yet is Billy Zane as her theater-troupe cohort, who is apparently so magnetic that an earnest deputy (Jason Priestley) falls in love with him (implied by the deputy touching the actor’s hand, I suppose).

As I was left shaking my head at the casting, I have to give props to the total surprise of the film: Val Kilmer as Doc Holliday! Now, Val has never been one of my favorite actors (I loathed The Doors, for instance), but he alone (except for Kurt Russell’s twinkly eyes, of course) single-handedly makes Tombstone just about worth watching on a rainy day. Speaking in a syrupy Southern drawl, Kilmer’s Doc is frail, pale, and always has a sweaty unhealthy sheen. Just when you assume he is down for the count, he makes sure to show up for one more fight alongside his friend Wyatt. He is both a hoot, and is surprisingly sympathetic. I was ready to dismiss the film altogether, but if you are curious about a great performance that is buried in a big, dumb movie, Kilmer’s Holliday is worth checking out.

Considering how much factual and fascinating historical information could be included in a Blu-Ray release, this release is relatively lazy despite looking crisp and sounding great in HD. Recycled from previous DVD releases are some on-the-set featurettes that include interviews with the cast from the time of the film, plus a director’s storyboard of the O.K. Corral shootout scene. There are also a whole bunch of trailers (almost a dozen) that are kind of interesting, but get repetitive quickly. And that’s about it. Really? I found myself going to Wikipedia to find out more. One thing to note, this is not the director’s cut, which was previously released on DVD, and there is no director’s commentary.